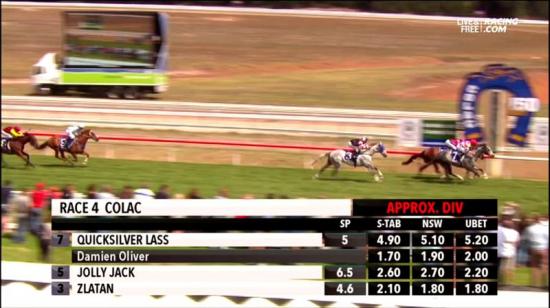 Despite chalking up more than 100 Group 1 winners, an elusive victory at Colac remained off Damien Oliver’s impeccable CV until partnering Quicksilver Lass to victory for Mornington-based trainer Tony Noonan in the AKD Softwoods (BM70) Handicap over 1600m.

Riding at Colac for the first time in his illustrious career, Oliver was visibly excited to have claimed his first winner at the rural track which hosts just a handful of meetings each year.

“It took a bit of catching the second horse but she got there,” Oliver said.

“I had to get stuck into her but she’s managed to wear it down”.

Jumping well from the barriers, Oliver settled Quicksilver Lass in the box seat behind the leader to give the 7-year-old Testa Rossa mare a dream run in transit.

Angling out upon cornering, Oliver seamlessly worked off the fence before balancing up to drive Quicksilver Lass ($5) to the lead with 50m to go and claiming victory from Jolly Jack ($6.50) by a head with Zlatan (4.60F) back in third.

Prior to riding today, the closest Oliver had been to Colac was when he drove past on his way down the coast for a surf.

Rounding out his day with a winning treble from four rides, it may not be the last time the people of Colac see the Hall-of-Famer.