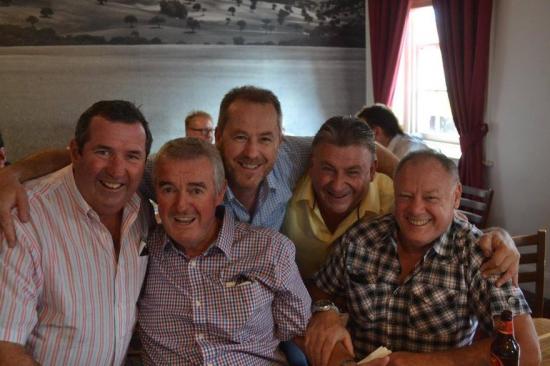 The Tony Noonan stable is in hot form with four winners in four weeks (three metropolitan) on the track but off the track, the stable is in equally hot form.

The Mornington-based trainer’s OBE Luncheons have proven a hit with clients and regarded as one of the highlights of the stable’s social calendar.

As part of the Luncheon’s formalities, guests were invited to submit their tips for the following day’s Flemington quaddie with the selections ultimately saluting and returning $2,125, of which the stable had 100% if the dividend.

“The food and drinks at these luncheons are worth the day out alone but to hit the quaddie makes them even better,” Noonan said.

“We have to thank Tat Cork who tipped us into the last leg with his horse.

“I was worried we were going skinny into the last leg with just three selections but Tat warned us not to leave his horse out and he is a very wise man.”

Malaguerra ($4.40F) made easy work of the first leg before Palentino ($10) survived a protest to win the Australian Guineas and bring home the second leg. Attendees were safe either way the protest went with runner-up Tarzino also included in the luncheon’s selections.

The third leg was brought home easily enough when Wawail ($4.20F) continued her excellent form at Flemington where she has not missed a place in four starts before it all came down to the final leg of the quaddie where the luncheon had just three selections in the field of 16.

Playing it safe, the selections included Divan ($2.90F) and Spreadeagled ($4.80) who were the two most fancied runners in the race as well as Tom Melbourne at $10 to inject a bit of value into the quaddie as per Tat Cork’s suggestion to all attendees.

Winning comfortably by 2.75L, Cork’s tip (and horse) never looked in doubt to bring home the $2125 return for attendees of Noonan’s luncheon who have the option of rolling their winnings into the next luncheon or donating to the stable’s charity of choice – Very Special Kids.

Venturing to the Robert Burns Hotel in Collingwood on March 4, the Luncheon featured Des O’Keefe, General Manager of the Australian Jockey Association, as the stable’s guest speaker for the afternoon.

Photos from the Luncheon can be viewed on the stable’s Facebook page here.