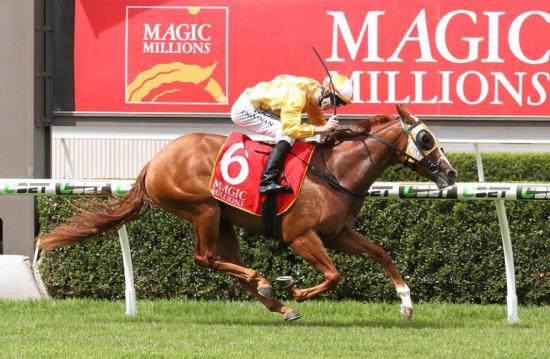 Sent over to Adelaide for her third career start, the Victorian raider had already tasted minor success when running third in the Victorian edition back in November.

With blinkers applied for the first time, the 2-year-old Sepoy filly flew out of the gates to lead all the way with trainer Tony Noonan delighted with his stable staff and track riders who have played a big role in educating She's Positive.

“The filly has always shown above average ability from the day she joined us,” Noonan said.

“She was a but immature mentally last prep which was why we gave her just the one start but since coming back with some time in the paddock, we have ironed her attitude out and she’s racing much better.

“I have to give the utmost credit to Frank for firstly giving us the filly and secondly supporting us all along the way.

“He’s a pleasure to train for and takes such good care of the filly when we send her home for a break.”

Flying out of the gates with the blinkers applied, She’s Positive found the lead with comfort under Jake who took her straight to the front despite jumping from barrier 10 in the field of 10.

Upon straightening, She’s Positive ($8) produced a lovely kick at the top of the straight where she kept finding on the line to win well by 1.8L from Bullion Wolf ($5.50) and Mr Markou ($13).

Despite the filly's hot attitude earlier in the season, Jake paid tribute to the stable staff back in Mornington who have worked tirelessly with She's Positive this time around.

"She can be quite full-on and has white line fever when she steps onto the track," Jake said after the win.

"But they've done a magnificent job to her her to this stage and make her controllable.

“Once I found the rail, I knew she would be really hard to run down.”

With today’s win, She’s Positive becomes the first winner for Sepoy as a stallion and is the second foal out of the Group 3 winning mare Be Positive who was also trained by Noonan.