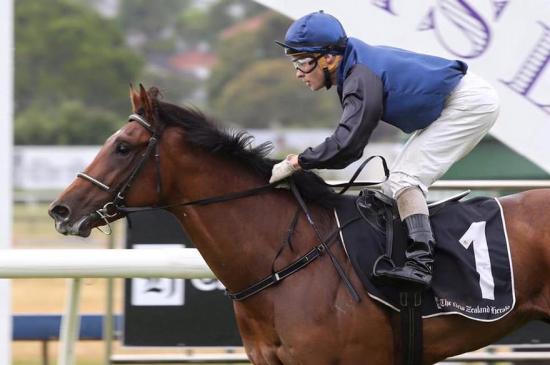 Purchased for $115,000 by Victorian-based trainer Tony Noonan at the 2015 Karaka Select Yearling Sale, Manolo Blahniq was left in the care of Thornton, a close confident of Noonan with the friendship developing 15 years ago back in the United States where Thornton previously rode.

Jumping as the $1.90 favourite, Manolo Blahniq was driven to the lead under Matthew Cameron to avoid any interference which cost him the race when on debut at his previous start.

Upon cornering, Manolo Blahniq gave an almighty kick to ultimately surge to victory by an emphatic 3.5 lengths.

The victory immediately shot Manolo Blahniq to favouritsm for the Karaka Million on January 24 where he sits atop the market ($2.50, TAB) with Noonan, who the horse will be transferred to after

“We have an extraordinary group of owners in this horse who I am absolutely rapt for,” he said.

“I was watching the race with Johnny Racovalis and his wife Vicki who have owned horses for a long time and to see their faces after chalking up their first Group victory was exactly why I train horses.

“It’s also fantastic to have Nearco Stud in the horse (whose colours Manolo Blahniq races in) because they have had excellent success over recent years and are bringing it with them into this horse.”

Manolo Blahniq will likely be aimed at the Blue Diamond and/or Golden Slipper when transferred to the Victorian-based trainer but Noonan is insistent of just taking it “one race at a time”.

“Craig has done a phenomenal job with the colt since the day I told him I’d be sending it to him so it’s great to see him getting rewarded for all the hours of work he has put into the colt.

“He presented as a physical brute of a horse at the sales so I was very confident he would make the grade which was why we sold him to our Australian clients as a Karaka Million prospect from day one.

“The Blue Diamond would be on our radar but we’ll just wait to see how he comes through the Karaka Million.

“It’s all pie-in-the-sky stuff which we’ll address after the Million but we will keep all of our options open for the time being.”

The son of Jimmy Choux possesses a striking physical appearance to his sire who, like Manolo Blahniq, ran second on debut before winning his next start.

Jimmy Choux then went on to win his third start which, understandably, has connections grinning.