THREE WINNERS IN THE WEEK BY A NOSE AND THEN……..LADY DOM BY 6 LENGTHS!! 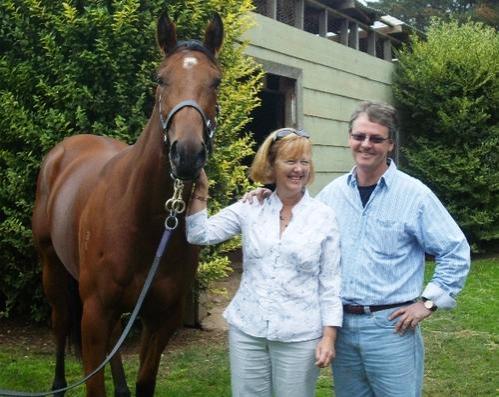 Having only her second race start LADY DOM (Johannesburg/Highgrove Lass) today stepped out at Seymour over 1009m. She started favourite but with the way she won you would not have been surprised if she had of been odds on – winning eased down by 6 lengths!

To say that the preparation this time in and the previous times in have been frustrating for the owners would be an understatement. She has had a number of mishaps and set-backs, to a name a few - bone chip in her knee, eye problems, nearly cut off her tongue....... You can imagine the patience required by the owners to get through these! Of late even though she has been up and ready to race we have struggled to get a run with her, today she was an emergency but to the delight of the owners and stable she got a run.

Ridden by New Zealand jockey Michael Walker, who is basing himself in Melbourne for the upcoming spring carnival, she jumped away ok but was then able to get herself in a lovely position on the fence and lead. On the turn she was travelling nice and when Michael put the pressure on she raced away from the field to win by 6 lengths.

Post race Michael commented how he was pleased with her performance ‘She didn’t have the greatest speed out of the gate and Tony told me that if I couldn’t lead to take a sit behind the leader, however she worked herself into a nice position. To Tony’s credit he told me that she was ready to win and today she was just too good for her rivals’.

Congratulations to all of her owners in the Dom Syndicate 1 & 2 and syndicate manager Tim Wilkinson we hope that we are now on the road to plenty of wins with no set backs!