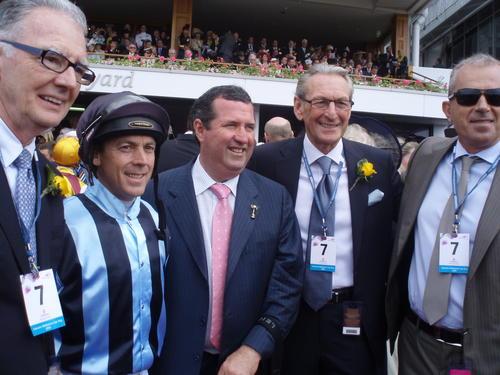 Our prayers were answered when Flemington track was put up as a dead 5 on Cup morning, unfortunately in our prayers we left out the part that we would like the track to stay that way all meeting. The rain came throughout the day which meant a down ground in the track and from then we knew it would not be to BUCCELLATI’S liking.

Jockey Steven King rode a super race on him, he was in a lovely position but when the whips started cracking he was not confident in the going and weakened in the field.

The script that played out on Tuesday was not one that we had written. However, we were proud to be part of such a big race! Once again to his owners Peter & Jennifer McMahon, Neven Botica and Rex & Wendy Gorell even though the weather dampened the track it didn’t dampen their spirits and they were able to enjoy the race. We thank you for allowing us to train BECCELLATI and taking us on this journey with you.

BUCCELLATI has pulled up well after his run yesterday. The owners will now discuss with Tony the options of where we head to next with him. To date the career of BUCCELLATI has been very exciting and we are sure that there will be plenty more exciting chapters to add!