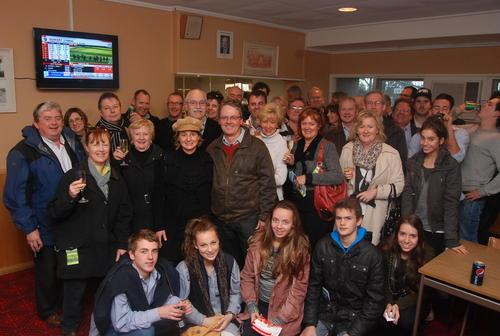 LADY DOM returns after a long spell to gain a popular win at Pakenham yesterday for the Dom Syndicate in the 1000m Star News Group Country Challenge Handicap.

Going out a well backed favourite, she jumped well from the gates and jockey Danny Nikolic was able to roll forward on her to put her in a nice position, travelling one out one back where she settled nicely to the bend. Upon straightening he was able to get her out to the middle of the track working into the race around the 200m mark to hit the front in the closing stages and run down Prince Kung and go on to win by ¾ length.

This is a mare that has had her fair share of setbacks that has meant she has been 8 months between races. So to see her return in such great winning form was a real thrill for all her connections who are a great bunch of owners and it was fabulous that most of them were on course to witness this win. Yesterday’s win now takes Lady Dom’s record to 2 wins from 4 starts.

A special thanks to the syndicates Manager, Tim Wilkinson, who is very passionate about the game and makes it so enjoyable for all involved with the mare.

Lady Dom is actually the second horse the Dom Syndicate have had with the stable the previous being Domzero who went onto win 5 races for the syndicate.

Pictured: The Dom Syndicate in the Winner's Bar!