Noonan: This Is What Dreams Are Made Of 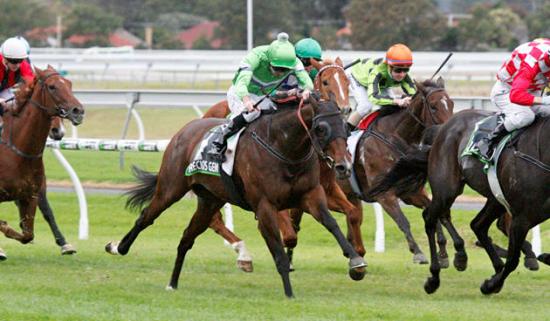 On May 7, 2011 there were fears Jake Noonan wouldn’t live after a horror race fall at Flemington.

Exactly five years later, Noonan achieved the greatest moment in his career as he guided Precious Gem to victory in the Group 1 Robert Sangster Stakes at Morphettville.

It’s been a big journey for the 23-year-old and it was fitting he finally reached the pinnacle on the milestone day.

“This is massive - this is what dreams are made of,” Noonan said.

“To think five years ago I was laying on the Flemington turf looking to see whether my life was going to continue at the time.

“The fall was that serious at the time.

“The fact I’m even riding Group 1s, let alone winning them, is just huge for me.”

Noonan has been riding in great form recently, winning a couple of Listed races in the past month, earning the opportunity to show his skills at Group 1 level.

But even riding in the race was a battle - having to get three meetings shaved off a suspension to be able to partner Precious Gem.

He was successful in his appeal on Wednesday and the result showed why he fought so hard to get this opportunity.

Despite being suspended, trainer Henry Dwyer booked Noonan anyway, and the hoop repaid the faith with a perfect ride.

“To capture my first Group 1 for such a good up-and-coming and loyal trainer like Henry (is awesome),” Noonan said.

“He’s done wonders for my career and for him to keep me on today, is a massive confidence booster.

“I’m really grateful for the opportunity and to get the job done means so much.”

The win is Dwyer’s second Group 1 success, following on from Sonntag’s Queensland Derby victory in 2014, but he was deflecting the credit to his jockey.

“I’m really more pleased for Jake than anyone else,” Dwyer said.

“Everything went to plan - Jake rode her a treat.

“We were here because the race was here, not because it was the ideal race for her.

“We were looking towards a nice Group 3 in Brisbane over 1350m and this was almost a lead-up run to that.

“So we just freshened her up and kept her going.”

Precious Gem has only had five starts for Dwyer and is set to be sold at a broodmare sale in a month, but connections have nominated her for the Stradbroke Handicap and Tatts Tiara.

This article was first published by Tom Biddington on Racing.com.