Red Silhouette Breaks Through For Emphatic Win At Pakenham 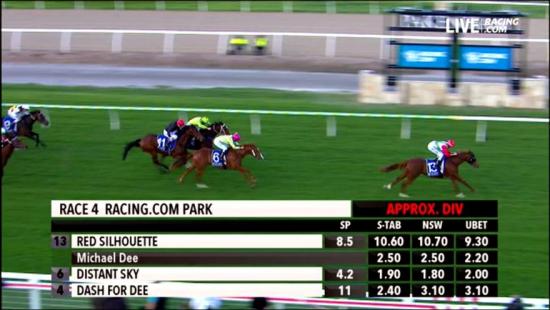 Red Silhouette finally delivered on the promise she showed as a younger horse when powering away at Pakenham in the R&C Asphalt Paving Maiden over 1400m.

As a filly who was not beaten far at Group 2 level as a 2-year-old, the Tony Noonan stable was always confident a win was just around the corner.

“She came back as a 3-year-old with high expectations but needed a few things to come together,” said stable representative Douglas Arnold.

“She’s muscled up a little and is just coping with training better.

“We were able to put the blinkers on her and that was a big advantage for her.”

Jumping well from barrier 8 under jockey Michael Dee, Red Silhouette settled midfield amongst the field of 13.

Rounding the turn, a split opened nicely for Dee who drove the Red Silhouette ($8.50) through to hit the lead 200m from home where she kept finishing strongly to score by 3 lengths from Distant Sky ($4.20) and Dash For Dee ($11) in third.

“She gave me quite a nice feel,” Dee said after the win.

“Blinkers on first time today has definetly turned her on.

“It surprised me a little bit that she kicked like that because she pulled very hard throughout the race.”

It was a welcome victory for the 3-year-old Rip Van Winkle filly who showed so much promise as a youngster that trainer Tony Noonan purchased the 2-year-old half-brother, Manolo Blahniq, who is already a Group 3 winner and now being set for the Melbourne Spring Carnival.