SINGLE WARRIOR CLOCKS UP HIS THIRD WIN AT BELMONT 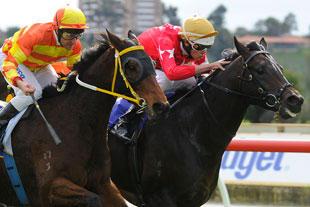 SINGLE WARRIOR (4h Duelled – British Version) had a gallant win at BELMONT on Wednesday, having been scratched from Saturday’s race in lieu of finding a more suitable track which we got. He got a fair way back in the running but apprentice Michael Grantham showed good initiative to have him improving into the bend and then was able to peel off and make a long sustained run for the post. To SINGLE WARRIOR’S credit he dug deep and fought off the late challenge from the fast finishing Kenbon to win the 1650 event by a short head. This comes off the back of him having won his maiden at Pinjarra, then winning his next start at Northam, running a super race in the BELMONT CLASSIC last month to finish 5th and an unlucky defeat beaten a half length at his previous Belmont start. The horse is in terrific form which is a credit to all the staff at our Perth stable. Congratulations to his owner Neven Botica, we are thrilled for Neven and it was great to see him have another nice horse make his first appearance at the racetrack earlier in the day in the striking 3 year old son of Mossman, SILBAR (ex Silver Atom). This was a very nice debut and we are very much looking forward to his next start.