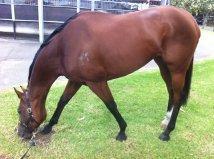 After arriving on the 16th of March, Varenna Miss otherwise known around the stable as “Tegan” settled in tremendously with no problems after the ten and half hour trip. Having travelled before to Sydney, Brisbane and Adelaide, Tegan was no newcomer to the adversities of travelling.

Whilst at Rosehill, Tegan and I will be training out of Tim Martins setup, conveniently situated directly across from the oncourse 70M straight swimming pool. Currently Tim is leasing 10 boxes to Peter Moody who at this point in time has the likes of Manighar, Kings Rose, Huegill, Curtana, Do Ra Mi and Shadow Margeauex up here for the Sydney Autumn carnival. Luckily for me I was up here to witness their stable have Group 1 success in the Ranvet stakes with Manighar. Being here by myself I have come to befriend a number of workers around the complex including Peter’s staff.

Nevertheless Tegan has thrived in the conditions up here responding positively to the Sydney way of going when working on and off the track. She has gone through her paces twice to date, once on the sand track and the other on the outside of the course proper - running over 800m, her last 400m in 25.83 seconds on the 22nd of March. This would be her final gallop before her successful trial at Randwick on the 26th of March.
We set off for Randwick at 5.45am allowing considerable time for Sydney’s congested traffic conditions. Luckily for us we arrived in no time at all allowing for Tegan to familiarise herself with the surroundings and to have more than enough time to settle before her trial. Tony arrived just in time to watch the trial on top of the hill, while I made the mistake of standing on a mound which made out to be an Ant’s nest after I had aggravated it. Varenna miss won the trial in fine fashion, Nash taking her up the rail in hope of finding more even ground and ultimately a better surface.

Varenna Miss pulled up exceptionally well from the trial hinting she was on her way back in good condition. Since then she has enjoyed a relaxing few days swimming and working slowly around the Rosehill training complex.

I intend to update you on our progress every couple of days but until next time - Thank you for reading.