DANIEL SCHMITT ON ROAD TO RECOVERY 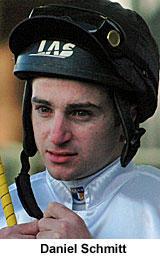 Following a serious leg fracture in a starting stall incident at Cranbourne several weeks go we are really pleased to advise that Daniel’s injury is recovering well, almost better than expected.
Daniel remains upbeat but said “although the frustration of being on the sidelines certainly creates some challenges my couch has a fair indentation in it as I endure hours of television. At least I am reasonably mobile and I’m looking forward to being able to get out and about more in the weeks ahead. You don’t realise how much you miss it”
Ironically the horse that caused Daniel’s injury, Godson, is running in the first race at Mornington today and the stable are confident of a strong performance despite the outside draw – a win would be a bitter sweet tonic for Daniel.