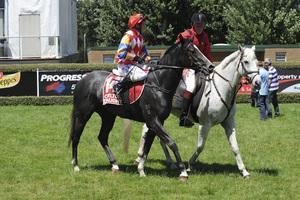 There were emotional scenes after the last at Mornington yesterday when Quicksliver Lass provided her large group of owners in attendance with a classy and gutsy win in the final event, the 0-72 Showcase Handicap over 1200m. It was also testament to a great training performance by Tony Noonan.

Trapped three wide for most of the 1200m journey Jake Noonan rode a very patient race, kicking the Testa Rossa / Fullazz  grey clear at the top of the straight, withstanding the challenges, and then drawing away.

Tony was thrilled with the win as it topped off a good day for the stable at the big Peninsula Cup meeting. Congratulations to all the owners of Quicksilver Lass represented by media savvy Terry Ritchie at the post race TVN interview and at the trophy presentation. Terry told the viewers and on course patrons " that it was a great thrill to have the mare back after suffering a fractured shoulder almost twelve months ago and it is a great credit to trainer Tony Noonan and his staff to be able to get the mare back to winning form and in such emphatic fashion". Terry also congratulated Jake Noonan for his patient ride and getting the horse home. The winning owners bar hadn't seen that many owners in it for some time.

Over the course of the day all the Tony Noonan horses did their best in all races with Swiss Flyer and Our Supearlitive running very honest seconds in their Maidens and Grand Orator battling on well  into fourth place in the 1500m Handicap. All have their hoof on the till.

The last race victory provided a great launching pad for Tony's legendary After Derby BBQ held back at the Greendale stables.  Among the many attendees was Louis Mihalyka and all the Laurel Oak Owners (some 50 in total) who had earlier in the day attended a special breakfast and parade of the Laurel Oak horses under Tony Noonan's care.

It was truly a great day and at the BBQ Tony thanked his wife Gabe, his family, Maggie McDonald and paid a special thanks to Pam Clements (TNR Office Manager) and Ted Goss (TNR grounds and maintenance man) for their hard work and significant contibution to the success of the day. Tony did a sensational job again as mine host and everyone had a terrific time. In closing Tony also congratulated Quinny Scott on his success in the Peninsula Cup with Another Prelate who won the event in convincing fashion.