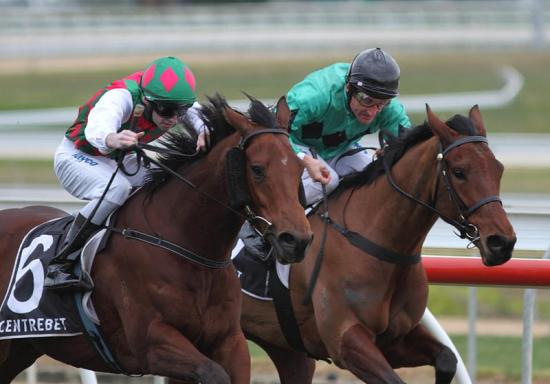 Following ten days of little activity on the track, with the exception of Temples at Pinjarra last Wednesday, the stable is gearing up for a busy period ahead and hopefully at least one or two runners finding the winners stall.
The week commenced yesterday at the Cranbourne trials with six Tony Noonan trained runners going around. As with all trials each horse trialling had its own purpose and plan to be carried out and Tony was pleased with the efforts of all that went around. Several were strictly education trials, particularly the unraced and those resuming from a spell.
Tomorrow our racing attention is on Sandown with Swiss Flyer stepping up to the mile in race two following his terrific last start second at Mornington on Peninsula Cup day over 1500m. With Jake Noonan on board again, the rain effected going predicted for tomorrow should not diminish his chances as he ran second back in April on a slow 6 at Cranbourne.
Grand Orator (photo left) is also an acceptor for Sandown in the last race over 1600m, also stepping up to the more suitable 1600m following a creditable second up fourth at Mornington where the horse may have felt the very firm surface.
Grand Orator is also an acceptor for Bendigo on Thursday, again over the 1600m with Jake Noonan to ride on either day. A decision about where to head with Grand Orator will obviously be made overnight.
Zarzing comes off its very creditable ninth in a hot field on Oaks Day and will resume at either Pakenham on Friday or Kyneton on Saturday.
Others also nominated for races at Pakenham and Kyneton are Amalgamate, Johanna’s Own and Return Journey. The in form Quicksilver Lass is likely to have her next start at Sandown on Wednesday next week after a four week break following her outstanding win at Mornington on Peninsula Cup Day.

Over in the west the promising Black Grape comes to town over 1200m at Ascot (in race six) following an impressive win at Northam four weeks ago at only in his second race start. The Tony Noonan trained three year old gelding is owned by Tony's Perth assistant trainer in Nick Cox. All at TNR wish Nick all the best with Black Grape at his first city start.

He will be ridden by Shaun Meeres who has just resumed riding after being injured in a race fall over four months ago.

Probus Club Stable visit
Following a successful stable visit the previous week by the management and staff of the Mornington NAB branch, the stable hosted the local Probus Club last Friday.
Both visits have been part of the Tony Noonan Racing community program for local groups and sporting clubs.
Some sixteen Probus Club members thoroughly enjoyed the experience where they witnessed a behind the scenes look at our horses preparation including treadmill, swimming and the walker.
The visit also included a special talk by the dual Melbourne Cup winning trainer of Rain Lover in Mick Robins.