GRAND ORATOR SALUTES ON THE SYNTHETIC 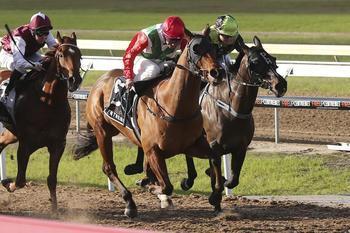 With the heavy rain in Victoria over the last week we have had meetings abandoned, postponed and transferred but the end result was that GRAND ORATOR recorded a terrific win at the Geelong Synthetic track on Sunday, June 16th.

GRAND ORATOR was originally going to race at Bairnsdale on the Saturday but that meeting was abandoned so we had no choice but to run him on the synthetic track at Geelong on the Sunday. We were slightly concerned that he would not handle the firm surface there but this horse does not know how not to try, he is as tough and honest as they come and he proved that again at Geelong.

Luke Currie was in the saddle and produced a nearly flawless ride, he was a little bit slow to jump from barrier 1 but mustered speed and sat on the fence behind the leading pair. Coming around the bend a run presented itself between the two leaders and Luke drove him through, he was strong to the line and ended up winning by three quarters of a length.

Congratulations to owners Laurel Oak Aidan Syndicate (L J Mihalyka), F W Cook, Mrs C M Cook, G Duffy-Smith, Mrs K A Fraser & Ms A L Goble, his strapper Viv Bertrand and all the staff who have done a tremendous job preparing this horse. This was his second win, he has proved to be highly consistent and we are confident that there will be more to come.