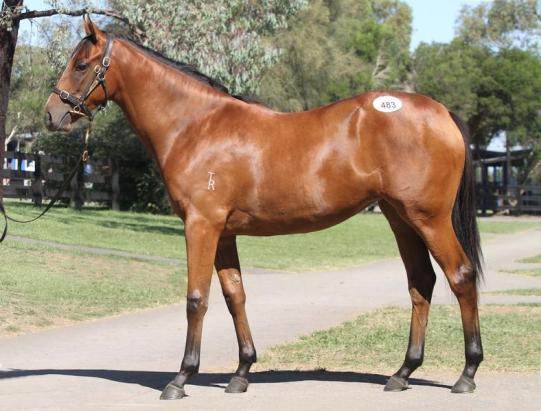 Tony Noonan Racing is excited about presenting a yearling filly by Savabeel out of the Pins’ mare, Leesing. We encourage anyone who is interested in racing a middle-distance, staying filly to take an interest in this filly who was purchased at the recent Inglis Melbourne Premier Yearling Sale.

I believe this filly has the perfect criteria that you so often look for, a pedigree with all the right ‘crosses’ and ‘nicks’.

Savabeel at the moment has had the best 12 months of his career as a stallion, he is by Zabeel and he has continued to clock up a number of Group winners in the last 12-24 months. He is likely to take over from Zabeel and O’Reilly as the leading sire in New Zealand.

I was aware of the pedigree attributes that worked well with Savabeel and I was really taken with the actual filly as an individual, so the combination made her an attractive purchase.

Firstly, this cross of Savabeel over a Pins mare has been a successful cross with Queensland Derby winner Brambles, VRC Oaks runner-up Dowager Queen and the very good Lopov all by Savabeel out of Pins mares.

Further, another appealing factor of this pedigree is that this filly’s female line reads: a Pins mare, who is out of a Centaine mare, out of a Sir Tristram mare, out of a Marceau mare. So, she has a double cross to Sir Tristram and she has a pedigree that you would like to see in a filly that you would expect to be an Oaks/Cups type filly later on. This is a blueblood New Zealand pedigree. That particular cross has already worked very well with Savabeel as Strike The Stars (earnings over $400k), the very good mare Placement (also earning over $400k) and the this season’s good 3yo in New Zealand Diademe all carry the same cross to Sir Tristram in the same position.

Because I was so keen on this filly, I had her pedigree assessed in England by renowned pedigree analyst Patrick Brain who rated her 134 with 3 stars. This is a very good mating result as evidenced by the fact that 75% of all dual Group One winners rate 180 or under and that group represents less than 25% of the horse population so we try to keep our purchases in that range to maximise our chances of buying a very good horse.

This filly was bred in New Zealand by Tim Harrison, Tim was very excited about her and after I purchased her he was happy to come to us and say that he would love to retain an interest in the filly which he has.

She is a lovely, neat filly who stands over a good amount of ground, seemed to have a good temperament about her and she walked well at sale time. She is a balanced and athletic type. Last week I went to inspect her at Springbank Farm in Shepparton and she has just done super since that sale period. I deliberately put her out after the sale and will look at getting her broken in later this month. We are now putting her up for offer with shares available.