THE WINNERS CONTINUE WITH WORTH EVERY PENNY AT SWAN HILL 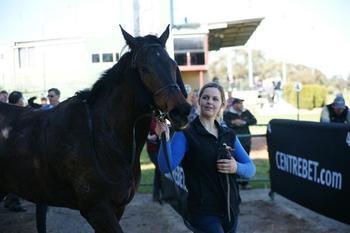 At Swan Hill on Monday, July 29th, WORTH EVERY PENNY won the 1600m Maiden to make it four winners in just over two weeks for Tony Noonan Racing. After being flattened by interference from another horse at her first up run at Ballarat in late June, the three-year-old filly by Testa Rossa out of Marriage Value drew wide and had no luck at her next two starts and finished well down the track.

Getting to the 1600m for the first time and on an improved track at Swan Hill, Jake Noonan produced another brilliant ride to get her home. She jumped well from an inside barrier, Jake put her in a perfect spot on the fence just off the lead, a run presented itself at the top of the straight, she kicked to the lead and held off some fast finishers out wide to record a neck victory.

Once again we congratulate and thank the owners for their patience with a filly who had proved at times frustrating. The owners are G & K Fraser, N & L Ferguson, J Ferguson, Heinrich Bloodstock (G Heinrich), Krake Investments P/L (J Krake), M Gheerbrant, F Clark & M Kitchingman. Thanks also to strapper Jen Duffy and the staff for all their hard work at home. Now that she has gained some confidence, we look forward to her good form continuing in the coming weeks.

As mentioned, this was the fourth winner we have had in just over two weeks, the second at odds of over 20-1 and in addition we have had a number of placings, including some at big odds so the stable is definitely firing at the end of the racing season. With the horses we have in good form, we are hopeful that the run continues on into the next season.