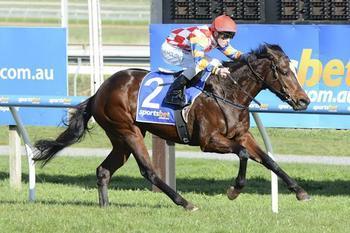 Everyone connected with the Tony Noonan Racing stable celebrated the end of the racing season with much enthusiasm as the stable recorded victories on the last three days of the season, meaning that from July 12th until July 31st we had a total of 6 winners, some of them at very good prices. As reported in previous articles, we had WORTH EVERY PENNY salute at Swan Hill on Monday July 29th and SPECIAL GIRLS win at Mornington on Tuesday July 30th. This paved the way for the final day of the season at Ballarat on Wednesday July 31st where we had NAVORINA win the Showcase Three-Year-Old Fillies 0-68 race over 1200m.

This was NAVORINA’s second win in a row and she demonstrated her versatility with her previous victory being on the Good 3 rated Geelong Synthetic track and this one being on a Heavy 10 at Ballarat. Expertly piloted by apprentice Patrick Moloney, the Testa Rossa Filly out of Tarantou jumped from the inside gate, showed her customary speed to sit prominent, hit the lead, drew clear and they were not able to run her down, recording victory by one and three quarter lengths. Congratulations to owners R H T Landale, C A Landale & Ms J V Ingham, particularly to Rob Landale who bred the filly and to strapper Dylan Caboche who followed up his first winning strap for us with another winner the very next day!

It is an exciting time for the stable with all the very hard work from the staff being rewarded with our results on the track. Keep a look out for our runners over the coming weeks as we are confident this good vein of form will continue.