ANOTHER EXCITING WIN FROM KUTCHINSKY! 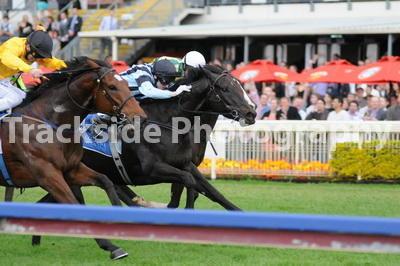 An exciting win doesn't sum up the victory of KUTCHINSKY at Doomben on Saturday. The gelding by Annabaa got back in the race and had to overcome all the odds to secure victory in the Group 3 Grand Prix Stakes at Doomben.

It was Kutchinsky's  first run the opposite way of going and Tony thought that he would run a good race however he would improve on whatever he did. Tony admits that approaching the home turn he thought he was no chance.

'I gave him away before the corner, he was struggling and not handling the give in the groud'

'But then I could see him coming in the straight and all of a sudden I thought that he would run out of ground' Tony said.

The next race on the program now for Kutchinsky is the 2400m Queensland Derby at Eagle Farm. The track and distance Tony believes will be ideal. Jockey Craig Newitt is also looking forward to the Derby. 'He is a very good hore and is only going to get better fro the Derby'.

'None of those horses from Saturday can beat me in the Derby' Newitt commented.

Congratulations to his owners Peter & Jen McMahon, Neven Botica, Graeme Ward and Rex & Wendy Gorell we hope that the you enjoyed the win and enjoy the lead up to the Derby!