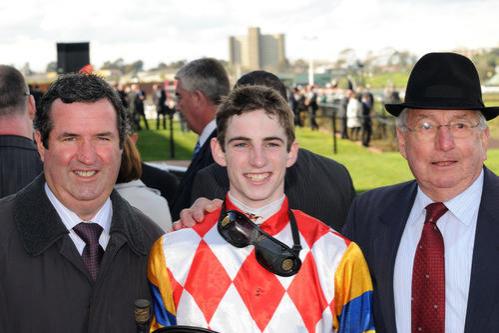 It was a wonderful weekend for Tony Noonan Racing. A huge congratulation to Jake Noonan our stable apprentice on securing him his first Saturday treble in town, to achieve this at Flemington is a huge credit to Jake.

With his confidence sky high Tony was extremely proud of Jake’s success ‘He has ridden extremely well today, it is a huge achievement to get a treble in town and to do it so early in his career is something for Jake to be very proud of’.

Jake was thrilled with the success but also extremely grateful to the trainers, owners and his fellow riders for the support that they have given in his career to date ‘Today was unbelievable to have achieve this at Flemington on a Saturday is a huge honour’

The treble came with a winner for Lee Freedman aboard Censor, and then two wins for the Noonan stable on WHISTON and BELSCENICA.

It was a wonderful start to the new season for the stable, a trend that we hope continues. Both horses won in impressive style on a wet Flemington surface. Our first winner was WHISTON, who drew an awkward gate and was going to have to rely on a bit of luck to get the right run. With a confident Jockey in Jake aboard he managed to pick his way through the field after settling back and get up along to fence to win in impressive fashion. Jake commented that when Whiston let down he got wind burn!

The second of the double for Tony came with BELSCENICA who has been racing in top form of late and was again able to secure victory. Again aided by a top ride from Jake who was able to ride her to instruction perfectly. She had a lovely position throughout running and Jake maintained a cool head and waited until the right time to let her go and she scooted away to win comfortably by 2.3 lengths.

‘I am really happy with the way both of these horses are racing. They continue to step up and are really enjoying their racing at the moment’ Tony enthused.

‘I look forward to their next starts as they are racing in super form’.

The double on the weekend was very big for the owners also as both horses are owned by similar interests. They had their first winner at Flemington when Whiston won there at the end of June, after racing horses for a number of years, the first win was sensational but to secure a double not long after was a huge thrill for the connections.

Finally congratulations to our Assistant Trainer Quinton Scott who won the Steeplechase on Sunday at Coleraine with ROYAL LADDIE who secured victory by 6 lengths!

We hope the winners continue to roll!!