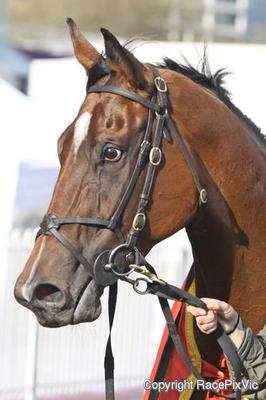 VARENNA MISS resumed at Caulfield yesterday. After her trial at Pakenham and her wonderful form last preparation there was plenty of interest in her first up run. Punters didn’t want to just see how she had returned they invested heavily, at one stage she was paying $1.04 on the VIC TAB.

VARENNA MISS jumped well from the barriers and jockey Steven King elected to lead on her and she did it comfortably. In the early stages of the race she had her ears pricked and was cruising. In the straight the back markers issued the challenge. When the pressure was on she knew it and gave enough to win. The winning margin was only 0.2 lengths but was full of merit for this daughter of Redoute’s Choice as it was only her 4th career start.

Tony was very happy post race ‘You look at her and she travels so easily in the run but she just gets lost out there in front,” Noonan said.

“Once that horse [Perfect Hostess] challenged she picked up a gear and she's been able to do that twice where she looked vulnerable and won both times, it was a pretty good effort.

“I think she would be far better just sitting back off of them and having something to chase.”

“She hasn't had a lot of experience and we would probably prefer to be in a position where someone else does the work and we can pick them off. Hopefully that will happen in the future."

She will now get her opportunity in a group 3 race in a fortnight’s time.

Congratulations to her owners Glenn and Kerry Fraser who have been extremely patient. They also have a share in Be Positive who also resumed in the same race and ran very well to finish third ridden by stable apprentice Ben Knobel. We hope that Glenn and Kerry have plenty of future success with both Varenna Miss and Be Positive.