STABLE DOUBLE ON THE WEEKEND 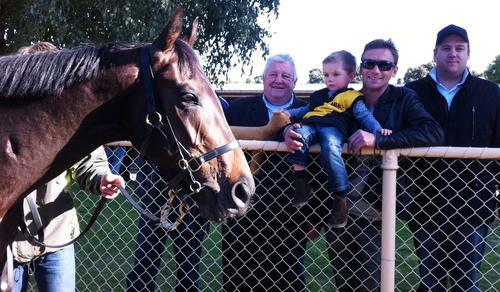 The stable had a great day at Cranbourne on Sunday with a winning double with promising mare TRISTA ROSSA having a dominant win in the Rivette Series Heat 5 over 1600m followed by exciting 3 year old gelding, MASSONI breaking his maiden status at only his second start.


Racing in the famous Blue and White silks of Gerry Harvey, TRISTA ROSSA (Testa Rossa – Altrista), was given a gift ride by jockey Craig Newitt who was able to peel her off on the turn to get into the clear and hit the front a furlong out to go on and win going away by 3 lengths. She has pulled up well after the run and should head to the Final at Flemington in 2 weeks time.


MASSONI (Bianconi – Bellonic) bred & raced by John Thatcher (pictured with Massoni, his grandson Mason where Massoni gets his name, son Richard and friend Jonathan) and Vern Jones, and also raced by Mick White, Barry Newton and John Mackay; drew awkwardly in barrier 9, he ended up being posted 4-5 lengths wide, much of it without cover, before bounding in the straight to run down the favourite and win by a length with another 4 lengths to the 3rd horse home.


Tony was very pleased with the win and also optimistic about the gelding’s future ‘we weren’t sure if he would handle the going, and also the wide barrier draw was a concern, I am thrilled that he won, he has plenty of ability and looks to be a nice horse in the making’.


This double is also on the back of a winner in our WA Stable last week, with SINGLE WARRIOR (Duelled - British Version) breaking through to win his maiden in fine style. Given a lovely ride by jockey Paul Harvey, the gelding was able to get in the clear off the turn and secure a soft win in the 1500m event. He is a horse that has shown a lot of ability having previously run in the WA ST LEGER last year.


CONGRATULATIONS to all the winning connections.