Starvasive runs them ragged at Pakenham 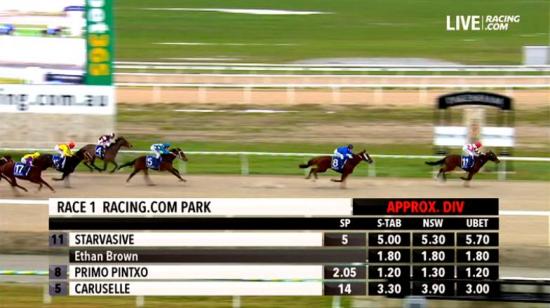 Starvasive has broken her maiden in emphatic style by running her rivals ragged this afternoon at Pakenham on the synthetic surface over 1000m for Mornington-based trainer Tony Noonan.

It’s been a difficult journey for the stable that has worked hard on the 3-year-old filly’s behavioural issues but today’s result suggests the penny has finally dropped for the daughter of Star Witness.

“She was an absolute train wreck on debut at Mornington after some good trials and it’s been a long journey back to settle down this filly,” said Assistant Trainer Douglas Arnold.

“We’ve been doing a lot of long striding slow work which has her much more relaxed but she’s still quite fiery at times.

“She’s still a work in progress but it is onwards and upwards from here for her owners who have been very patient with her.”

Jumping very well from barrier 3, apprentice Ethan Brown had no trouble finding the lead where Starvasive ($5) proved far too speedy to score by 2.7L from Primo Pintxo ($2.05F) and Caruselle ($14) a further 3 lengths behind.

“She’s come off a nice trial recently,” said Brown after the win.

“I got a nice easy lead and it got the job done.”

Despite the chilly Winter conditions, connections on course were delighted with the dominant result with several long-term Noonan clients involved in Starvasive.