JAKE IN THE UK 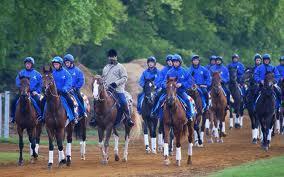 I left for england on the 13th of september not knowing when i would return. With not being able to ride it was really starting to bring me down watching all the races, riding the horses work and not at races and especially leading into the biggest time of the year for everyone involved in the racing industry. So i decided at the last minute to venture of to england.

I began my working holiday at Andrew Baldings in Kingsclere. I was staying with a good family friend William Huntingdon across the road and was well looked after. I started work at Andrews at 7am. The lifestyle was so laid back having to sleep in every morning. I would get there every morning check my list of horses and go saddle up my first one. As a track rider you were also a ground worker/ strapper. You did all the work with the horses on your list. You would brush them, saddle up, ride, wash rug and feed. So with that it would take an hour atleast to have ridden and done the work with one horse. That was the only negative about the experience. I would start at 7 am, work with the 4 horses i had on my list and would finish until 12:30pm with a breakfast break in the middle. I couldnt stand the fact it could take so long especially when back home it would take no longer than 2 hours to work 4 horses. But overall the experience overcame that negative as riding out track work was great fun and really different. Instead of working round the inside of a race course all trainers would have their own private property with straight tracks about 1000m long. They start at the bottom and for the canter and slow work they really seem to bowl along. They would canter most days a week and gallop once on the grass besides the all weather track of up the hill at downs. This was a great experience. The downs were incredible being in a massive paddock of grass with pegs that outlined the lanes where we would gallop. There canter was just about our gallop. It was hard work as the track would gradually rise as it got towards the finish. But with a good cool down and walk, the horses seem to recover well and i really thought this kind of long period of time on the horse and hands on work really influenced on the horses attitude. Their horses seemed really happy, comfortable and relaxed which made many of them good rides.

So after spending a week and a half there riding out for Andrew and meeting new people and old friends such as Chris Bonner the assistant trainer and David Probert one of the stable jockeys who had both came
over to our stable in the past i had been offered the chance to head down to Newmarket to ride out for Godolphin at Saeed Bin Suroor's stable. What a privelage and opportunity this was. I moved in with Marc Halford who was a jockey who had come over to Aus and rode out for dad once. So being good mates he offered me to stay for just about 2 weeks as we both rode out in newmarket. He was such a good mate when he was over and so he repaid me by looking after me whilst being in his country. At godolphin we started work at 5:15am. This was good as it was pretty similar to home and ment we would finish earlier. The stables and living of horses were like 5 star accomodation for horses. Their were alot of Arab workers who looked after the horses. All we did as a track rider was saddle it up and the ground staff did everything and very thorough. The horses were well so looked after. Which made sense as sheik would spend alot of money on these well bred and terrific looking horses. Their wasnt one slow one. If it was slow, it was out the door, and their definition of slow was similar to our ok and good enough horses. If they wernt balck type horses they didnt really plan on keeping them long. In that sense it was great riding out because i was always on top of a good one. The routine of riding out was the same as Andrews. We walk for 15-20 minutes and then trot for 10 inside a small trotting track. Then we would walk 15 minutes to the track and work up the Newmarket training facility tracks. There were atleast half a dozen tracks there that most trainers in newmarket were able to use. These were all nice straight tracks that would again gradually rise but in comparison to Andrews these tracks beside the gallop track were alot steeper in the rise. The horses were worked the same practically and would have about another 25 minute walk home. Again it would take along time to work a horse but the experience was well worth it. Especially when on my last day i was lucky enough to go to Godolphins private gallops where they have 4 tracks of their own and theirs only to work on, 3 grasses and an all weather track. These tracks were beautiful. The turf there was the same if not better then any race track id ridden on. They were well looked after and repaired after gallops. Just an unbelievable track to work on. I really enjoyed it.

Ive now finished up there and have booked to head home tomorrow to prepare myself for a hopeful comeback to races at home. I have really enjoyed my time working over here and the experience and knowledge i gained. Im sure its really going impact and influence on what i can use towards my riding and influence my success not only at home, but when i return to England to ride in the near future and later on in my career all over the world. Im looking forward to returning home and getting back into the routine of things, catching up with everyone and hopefully returning to
racing.