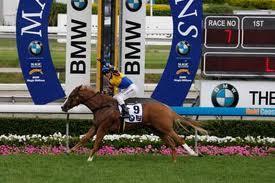 The race has been introduced by Magic Millions owners Katie Page-Harvey and Gerry Harvey to incentivise women to own horses within the thoroughbred industry and drive interest from women about the broader scope of employment opportunities that the racing industry offers.

Magic Millions owner Katie Page-Harvey believes that becoming a thoroughbred owner can introduce women to a new world of opportunities. Katie Page-Harvey has historically been a strong advocate for women; particularly in the sports in which she is heavily involved, such as the National Rugby League Women in League initiative.

Now Page-Harvey is aiming to encourage and incentivise women to get involved in thoroughbred racing by holding an information session at Magic Millions 2012 to help guide and better support them in the industry. The purpose is to demystify this very lucrative industry for women, providing an entry point through education and a substantial financial incentive.

Magic Millions owner Gerry Harvey said that becoming a thoroughbred owner can introduce women to a new world of opportunities.

"This bonus is a world first and we are excited about its launch and how it will grow in the coming years. Racehorse ownership over the years has been dominated by men – but we know the sport is loved by women and this $500,000 bonus is a great incentive," Harvey said.

Magic Millions Managing Director Vin Cox says, "So many Australians go to the races and they have a fantastic time but donâ€Ÿt understand the process behind how horses get to this point."

"We want this new Womenâ€Ÿs Race initiative to be embraced and add more glamour and excitement to one of Australiaâ€Ÿs best carnivals."

"The thrill of owning a winner is amazing. We want more women to experience this thrill and with the new $500,000 bonus for the 2013 BMW Magic Millions 2YO Classic that thrill can get so much bigger and better."

Champion Sydney based horsewoman Gai Waterhouse said she was excited about the new initiative announced by Magic Millions.

"The team from Magic Millions has always been a leader in innovation with its wonderful carnival and this new incentive is terrific."

"The race series was a world first when it was introduced by Magic Millions and this Women's Bonus and Race is another world first. The $500,000 bonus is a great incentive for women to become further involved through ownership of a horse in our wonderful industry."

"Can you imagine a horse winning the Magic Millions 2YO Classic next year and winning $1.14 million for first prize money and also scooping a $325,000 bonus for being the first female owned horse over the line?"

Women who are interested in the initiative can receive more detail by attending the Magic Millions Racing Women Area at the New Owners Information Day on January 8th to learn more about how they can become owners or pursue other aspects of employment in the industry such as training, jockeying, strapping, book-making or even through racing fashion. The event will be an opportunity for women to hear from racing experts including Gai Waterhouse and Katie Page-Harvey about their personal experiences as part of the racing world.

Full details and conditions of the race and bonus can be found in the catalogue for the Gold Coast Yearling Sale.