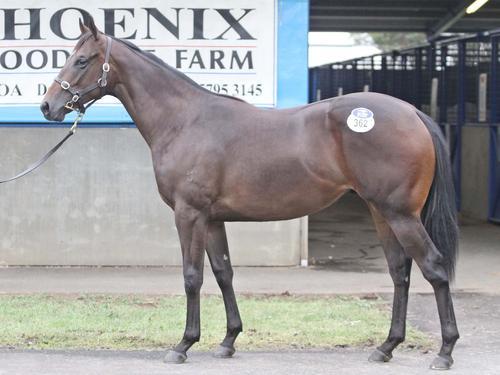 
It is with interest and excitement that Tony Noonan Racing presents for the first time a package of two lovely fillies recently purchased at the Melbourne Inglis Sale. Both fillies were inspected and purchased as individual types.

The Wonderful World filly in this package (pictured) comes from a consistent tough 2YO family. Her female line suggests so being a half sister to the Stakes Winner Carlton Spirit and the Stakes Placed Carlton Ace and as an individual she gives every impression she is likely to race as a two year old. Both these Stakes winning fillies won at 2 and have gone on to produce progeny that have also been stakes placed and won at 2. Her dam, Aces Royale, has produced 8 foals at which 6 have raced, all have won. She is a pretty sure bet.

This Wonderful World Filly is also a half sister to the promising colt Stratumsphere, which I currently train, already a winner of 2 races from just 5 starts, both of these as a 2 year old one of these being a city win. He just returned to the stable and is expected to continue on his winning city ways as a three year old.

As you can see from the photo, this filly has a strong shoulder and powerful hindquarter, she walks with purpose and I would expect these attributes to influence her chances to race early. Her sire Wonderful World is a Group 1 winning 3 year old who won the time honoured and sire producing Caulfield Guineas, these are his second crop of yearlings.

Being by a sire that won at a mile at 3 and then ran second in a Cox Plate, it would suggest to me that this filly should also train on at 3. Further to this, the filly’s pedigree would certainly place her in a wonderful position after her racing career to have a future at stud as a broodmare, you may have noticed her half sister Carlton Spirit has a representative at the upcoming premier sale in Australia, the Sydney Easter Yearling Sale. You can see why I use the term exciting in my introductory comments.


The second filly in this exclusive package is from the other end of the racing spectrum being by the well credentialed and super successful sire in Pentire. For a number of years this stallion has produced stakes winners both here and in NZ, where he currently stands and over all distances, but realizing that his best performances were in staying Classic Races.

This filly is the typical NZ staying type filly. Physically not over heavy in presence, she displays a quality typical staying type appearance. She too showed a lovely, fluent walk, giving me every indication that this filly is going to be getting over plenty of ground. This filly is much more a 3 year old type, being immature at this stage we will be approaching this filly as a 3 year classic type. She is out of a well bred O’Reilly mare, who is shaping up to be a very successful as a broodmare sire already currently boasting a 65% strike rate of winners to runners including the likes of Group winners such as Daffodil, Shopaholic, Sound Journey, promising filly Steps in Time to mention a few, and Charmed is out of the multiple Group Performed mare in Seraphic, winning over 1600 to 2200m. This filly is clearly bred to stay, her full brother sold for $400k at last years Karaka NZ Sales and is currently in work in NZ and since the sale I have had the inside word that he is showing a great deal of potential.

So after much discussion and contemplation, we have decided to offer these fillies in a unique package, which is to offer these fillies as one, where you have the opportunity to be involved in a filly that is being prepared to race as a 2 year old in sprinting middle distance races and another filly that will be set for the 3 year old Fillies Classics and if she is good enough hopefully onto the Cups as an older mare.

Both have been hand selected by myself as athletic individuals from stakes winning families and have terrific broodmare potential when they are retired and I want you to be involved in this. It gives you the owner an opportunity to have 2 beautiful fillies at an affordable price and because the likelihood that both fillies taking different paths, at different times, it also allows us to structure a unique option to be able to offer you a set monthly fee to cover the costs of both fillies.

For further information on both theses fillies and the Special Set Training Fee Package on offer contact our Racing Manager, Boo Harvey on 0427 403 952 or email boo@awnoonan.com