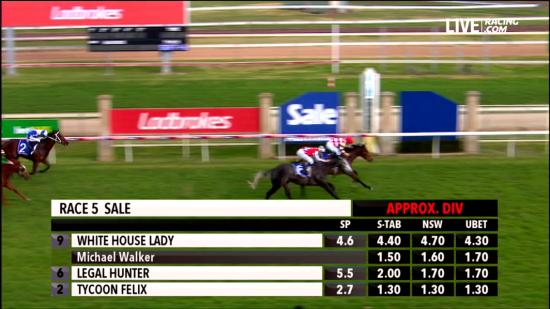 White House Lady returned to the winner’s circle at Sale this afternoon for Mornington-based trainer Tony Noonan with a strong performance in the Stratford Tourist Park Handicap over 1200m.

“Tony decided that after having a year off, the 1000m (first-up) would be the best option on a heavy track,” he said.

“The conditions that day looked a little testing late but it was a nice run under her belt and her fitness has got to the point she could do what she did today.

“She did it nicely. Her temperament looked good and we still have a bit of condition to work with so onward and upwards.”

Jumping evenly from barrier 2 under Michael Walker, White House Lady settled midfield on the fence behind what worked out to be a genuine tempo.

Rounding the turn, Walker effortlessly shifted the White House Lady ($4.60) off the rail towards the centre of the track where she look the winner 100m from home before holding off a late challenge by Legal Hunter ($5.50) by a neck with Tycoon Felix ($2.70F) a further four lengths back in third.

The win was Walker’s third for the day after a frustrating week both on and off the track but he was delighted to reel off a quick fire treble.

“I came here thinking my best ride was White House Lady,” he said after the win.

“They (connections) thought she could win the other day but she was still a little bit big and it was probably too wet for her.

“I said to the owners beforehand, she’ll win this thing.”

The victory was Walker’s first for the Noonan stable this season but unlikely to be the last.

“I just feel very privileged to be riding for such an amazing trainer in Tony Noonan.

“With Jake out, I’m happy to put my hand up and fill in till Jake comes back.”

White House Lady was the first foal out of champion mare Jacqueline Rouge who was also trained by Noonan.