SPLIT THE FAITH WINS BY A WHISKER 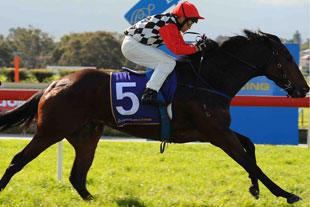 It was an exciting result yesterday afternoon at Belmont in Perth with our consistent mare, SPLIT THE FAITH, winning by the barest of margins in the fillies and mares 1600m event yesterday ridden by our newly acquired apprentice Jordan Mallyon who came off a double at Belmont on Saturday. Jordan rode a really positive race on the filly where at one stage she led by about four lengths, then, in a tremendous effort after drawing a wide barrier and going forward to take up the running, she showed great heart the last 100m where she was starting to tire but courageously put her head out to claim the victory. Congratulations to Jordan, he was on loan to us over in Perth for three months and is our apprentice over there now, his aim is to win the apprentice title over there so we wish him all the best with that endeavour. Congratulations to my assistant Nick Cox who has done a tremendous job with this mare, she has now won four from eleven and been a very consistent race-mare. Congratulations to owners Neven Botica, John Doherty and Rolf White, I am sure they would have got a great thrill out of her win yesterday as we did.