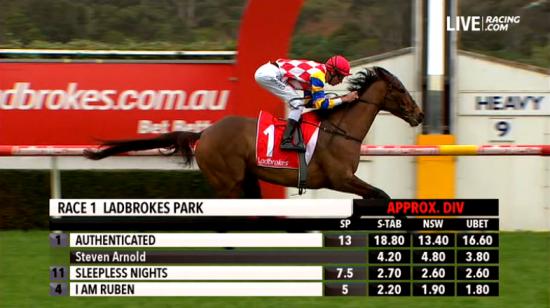 It may have taken 20 starts but Mornington-based trainer Tony Noonan never gave up hope on Authenticated who finally broke through for his maiden win at Sandown this afternoon in the Grand Hotel Frankston Maiden over 1600m.

Having repeatedly earnt cheques but not land in the winner stall, he has been a work in progress for the stable but all of that seems to now be coming together for the 5-year-old son of Authorized.

“He’s been an enigma but Tony has always been of the opinion he has ability,” said Assistant Trainer Douglas Arnold.

“A few of the owners haven’t won races for 15 years so they do have patience.”

Given a positive ride by Steve Arnold from barrier 10, Authenticated stayed wide down the back of the course where he over-raced before Arnold enabled him to stroll forward and cross into the lead.

Once into the lead, Authenticated relaxed into stride where he cornered two lengths in front of the field of the Heavy 9 going. When asked for an effort, Authenticated ($13) found another gear to kick well clear from the remainder of the field and bolt in by seven lengths from Sleepless Nights ($7.50) and I Am Ruben ($5) in third.

Despite the betting drift on course, Steve was quietly confident Authenticated was going to run a good race.

“His run the other day was really good actually,” he said after the win.

“He just put it all together and travelled like the winner. He was nice down the side and gave me a good kick.

“You would think after that; he’s got some more wins in him.”

The win will be a welcome return for Noonan who returns from a family holiday at the end of the week.