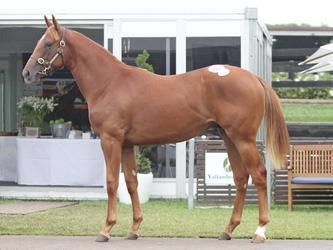 Couldn’t help but notice in today’s edition of the Australian NZ Bloodstock News a feature on Gai Waterhouse, as is not that uncommon at this time of year throughout media circles.
Among a range of questions Gai was asked was “how many two year olds do you have this season and is anything catching your eye at this early stage.” Gai replied “I have 105 two year olds under my care this season and there are lots of very exciting ones, including a number by first season sires in Serbring and Northern Meteor, both of whom I trained”
Gai was also asked “are there any first season sires that are impressing you” to which she replied “Serbring, Northern Meteor and Myboycharlie are well represented in my stable as their first crop yearlings were standouts and I could not be happier with their development in my stable”
In her 10 horses to watch out for over the Spring one was in fact a Northern Meteor two year old called Mr Jackman who we note has already won and was runner up in two recent Sydney trials.
Anthony Cummings also has a couple of Northern Meteors in his stable and one of them, Shine On, was also placed in a recent Sydney trial.
We believe this signals a timely reminder to all that may have an interest in the Northern Meteor / Jennifer Ann two year old colt that we currently have in the Noonan stable with shares still available as we speak.
Please refer to the “horses available” section on our website for further information on this very impressive looking colt from this highly regarded first season sire (photo far left of this story).
If you have an interest in discussing this terrific opportunity in more detail please don’t hesitate to call Tony Noonan on 03 5976 2670 or Glenn Scott on 0438 230 330 or email glenn@awnoonan.com