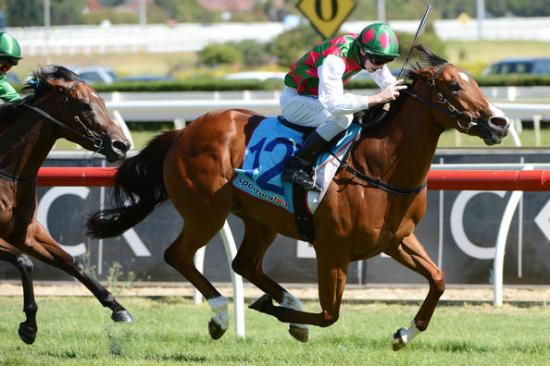 Boxing Day is a big day on the racing calendar all around Australia and Tony Noonan Racing celebrated the occasion with a terrific winner at Caulfield. RETURN JOURNEY, a lightly raced three-year-old filly having her third start, took out the Maxie Howell Handicap, a 3YO Fillies Benchmark 72 race over the 1000m. It was a courageous victory, the filly was a 30-1 outsider and travelled wide for much of the trip but secured the win impressively by one and three quarter lengths.

The filly, by Irish stallion Dylan Thomas out of an Irish mare in River Lena, was selected and purchased from Torryburn Stud at the Melbourne Premier Yearling sale in 2011, she was broken-in by Julian Welsh, she did not race as a two-year-old but has rewarded her owners' patience by recording two wins and a placing from her first three starts beginning in the late Spring. It is always very satisfying to see a filly picked out as a yearling go all the way through the developmental stages and make it to the stage of winning a city race and congratulations go to owners Laurel Oak Bloodstock Pty Ltd (Mgr: L J Mihalyka), Braybook (Mgr: S R Madge), D W Booth, Dr G P Darby, J Glenn, G S Grahame, P A Pick, M A Regan, Dr P D Braude, Mrs S E Mackenzie, P T Aalto & J Goodwin. It was a great thrill for Steve and Gillian Madge who travelled down from New South Wales for the race and Louis Mihalyka from Laurel Oak Bloodstock was also able to attend whilst in Melbourne.

The win came on a day with special significance for her rider Jake Noonan who recorded a double, including his first Stakes winner in the Christmas Stakes on Undeniably for Mark Kavanagh. Jake has been in terrific form and is becoming closer to outriding his city claim which will be a great achievement for him.

The victory was also timely for both Tony Noonan Racing and Laurel Oak Bloodstock who unfortunately suffered the loss of the promising two-year-old filly in CHIC STAR on Christmas Eve. The Starcraft filly was selected and purchased at the 2012 Gold Coast Magic Millions Sale and had really endeared herself to the staff at the stables in her all too brief time with us. It was a devastating loss for everyone involved but thankfully RETURN JOURNEY was able to put a smile on everyone's face again and remind us of the ups-and-downs that racing always brings.