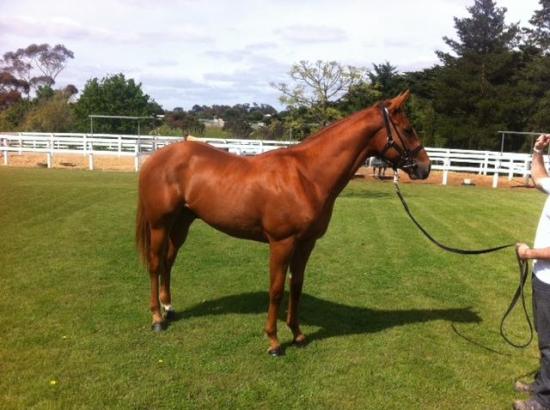 The first VOBIS GOLD conducted in Victoria was won at Ballarat yesterday by the son of highly rated first season sire Northern Meteor, a colt called Ticket to Toorak. It was Northern Meteors first winner from only two of it's progeny to race with the other being The Voice in Adelaide,trained by Tony McEvoy , being runner up at it's first start.

Ticket to Toorak, trained at Warrnambool by Matthew Williams, settled well off them at the rear in the small field but came home doggedly to defeat the long odds on favourite.

Ticket toToorak was purchased for $80,000 at the Magic Millions Sales on the Gold Coast earlier in the year. Northern Meteor stands at Widden Stud for $33,000.

We have been reporting fairly consistently of late on the hype around the Northern Meteors with Tony having a very promising colt out of Jennifer Ann.(see photo left)

This colt, with shares still remaining, continues to please Tony no end and is heading to its first practice jump out next Friday at Mornington.