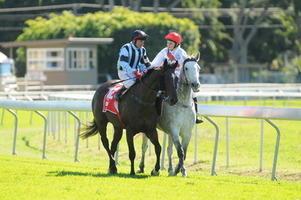 Tony Noonan Racing were very pleased with the performances of NAVORINA and ZEVADA at Sandown on Wednesday 20th March, 2013. Whilst both horses finished in second place, their runs were terrific and it signals an exciting time for the stable over the next few months.

NAVORINA, after her comprehensive first up win at Geelong, jumped from the outside gate over the 1000m at Sandown which is a very tricky gate to negotiate, she led up the field, kicked strongly on the corner and was only run-down by a potential superstar in Angels Beach for Peter Moody. Her effort was exceptional, she still has improvement to come and we look forward to her being very competitive in town at her next couple of starts.

ZEVADA was also second up but coming off a two year break from injury, after a terrific first up run he stepped out yesterday and was trapped wide with little luck throughout the race. Despite that and the 1400m being short of his best, he produced a courageous run to finish second beaten under a length. It is very exciting to have the big horse back at the races and performing well and we expect him to only improve as he gets more racing into him and gets over more distance.

Congratulations to the owners of both horses, Rob Landale in NAVORINA and Peter & Jennifer McMahon and Roy & Virginia Woodhouse in ZEVADA, Jake Noonan who rode them both and Dave McGrath and Jen Duffy who strapped.