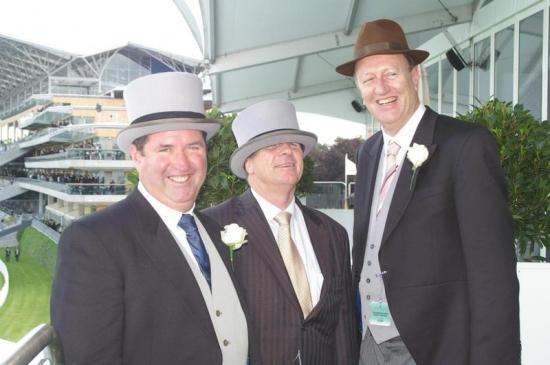 We received the following from Louis Mihalyka of Laurel Oak Bloodstock and thought some of our clients would be interested in joining us on future trips:

We have been delighted by the popularity and success of our major tours, and what started out as a one-off trip to Royal Ascot in 2009 has, due to its own level of success and sheer enjoyment, has become an (almost) annual event.

The three major tours that Laurel Oak conducts for clients and friends in conjunction with Tony Noonan and Cooks Touring are:

Doing all three tours every year is not sustainable, so we have prepared a Major Tour Schedule in conjunction with our co-organisers to give you the opportunity to plan ahead.

This year we have tours to Royal Ascot and South Africa, with the option of going on either or both legs of the tour. The tour organisation has almost been completed.
South Africa is a brave new adventure to a new continent for us, and is arguably the most exciting tour we have organised due to the uniqueness of the destination. At this stage there are three to four places available on the South African leg of the tour if you would like to make a late decision to join us.
Preparation for Royal Ascot is also at an advanced stage, and here the numbers are not quite as finite as when Black Caviar went last year and everything booked-out, but by mid-April we expect that we will have to draw a line in the sand for this tour with final numbers.

In 2013 there will be no New Zealand Stud Tour.

The Hong Kong International Tour will be on in 2013, departing on Tuesday 3 December and returning on Tuesday 10 December with the major International Race Day in Sha Tin being on Sunday 8 December. A golfing extension to Mission Hills will be considered, subject to demand.

In 2014 there will be no tour to Royal Ascot and no other major tour. We have already had enquiries for Royal Ascot in 2014 and will be happy to provide advice to help make your trip extra-special.

The New Zealand Stud Tour will be on in 2014, in early September, and will include a 2-day Taupo extension.

The Hong Kong tour will be on in 2014, once again built around the International Race Day at Sha Tin on the second Sunday in December.

The major tour planned for 2015 will, once again, be based around Royal Ascot, and will be followed by a Mediterranean cruise that will take in Istanbul and Gallipoli. Visiting this very special place in Australian history is something that has always been on my bucket list, so what better time than the centenary year of Gallipoli, but three months after the Anzac Day crowds.

There will be no formal New Zealand stud tour in 2015.

The current plan is that there will be no Hong Kong International Racing Tour in 2015.

Because each year rolls around very quickly and a lot of work is required to make the tours the success they have been, the overall thinking in organising the tours is that we will have a major tour incorporating Royal Ascot every second year. Once we get into the cycle from 2015, the New Zealand and Hong Kong Tours will be in alternate years.
We also expect that other impromptu tours within Australia to country race meetings or other events, including golfing tours, will also be slotted into the schedule whenever timing opportunities present themselves.
I hope this helps you in your planning and hope that you can join us on one or more of these tours.