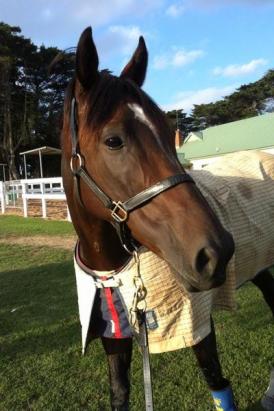 It was a terrific result at Sandown Hillside on April 10th where ZEVADA recorded a victory in his third run back from a two year absence from the track with injury. Ridden in expert fashion by Craig Williams in the 0-78 Mitavite Handicap over 1800m, ZEVADA sat third in behind two leaders at a fast pace, one leader kicked on the turn but ZEVADA chased him down to record a stirring victory by a half length. He ran .15 of a second outside the track record for the 1800m.

The big horse had to have surgery to remove a bone chip from his fetlock in 2010 after being successful at Eagle Farm during the Brisbane Winter Carnival. After his recovery from that he unfortunately injured his tendon in 2011 so it has been a long path back to the winning stall and a testament to the patience of his owners Peter & Jennifer McMahon and Roy & Virginia Woodhouse who would have been thrilled with the victory today.

Credit goes to all the staff at Tony Noonan Racing, in particular Jen Duffy who is his regular strapper but unfortunately was unable to attend today. Her devotion to the horse has been outstanding and whilst she would have been disappointed not to be able to be there, her work has been a very important part of his comeback. Credit also goes to Lisa Jones, his regular track-rider, the teams at the Queensland Vet Clinic and the Ballarat Vet Clinic who did a great job getting him back on track, Kolora Stud in Queensland and Shadowbrook in Victoria where he spent his recovery and the vets and farriers who attend to him at the stables.

What has been a terrific learning curve has been the positive influence of the modern training tools of the treadmill in conjunction with the water-walker. Tony has no doubt that without both tools it would have been possible for this terrific old horse to successfully return to the track.  We hope to see him continue on his winning way in the coming weeks as he stretches over more distance which should only see him get better!