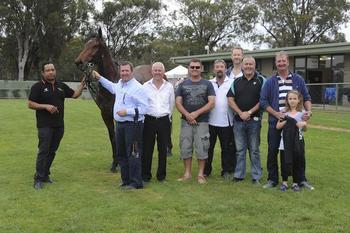 After a quiet period at Tony Noonan Racing with not a lot of runners but plenty of younger horses coming through their programs, it was terrific to celebrate a win at Seymour on Thursday, November 28th with MAGNUS OPUS at his first race start.

By MAGNUS out of McCUNE, ‘BATMAN’ as he is known was purchased by Laurel Oak Bloodstock at the 2012 Melbourne Inglis Sale. Laurel Oak, managed by Louis Mihalyka, have been a tremendous supporter of the stable over the years and it is always great producing a winner for them.

The horse was having his first start as a three-year-old as he unfortunately required throat surgery in early 2013 which was performed at the Ballarat Vet Clinic. It is always a concern that horses who have throat issues will not be able to perform up to their ability on raceday but MAGNUS OPUS showed yesterday that this was not the case with him which is testament to the terrific job the vet clinic did and the tremendous patience shown by all the owners.

Seemingly double to the size of all the other runners in the race and very green at his first start, MAGNUS OPUS settled back in the field, he was three wide but with cover, took off on a run from the 600m and let down impressively in the straight to win by half a length under Dwayne Dunn. He went into the race with plenty of improvement to come and he will no doubt gain enormous benefit from the run in terms of fitness and education so we are confident that he can go on with it this preparation.