TANNASET GOES ONE BETTER AT BENALLA 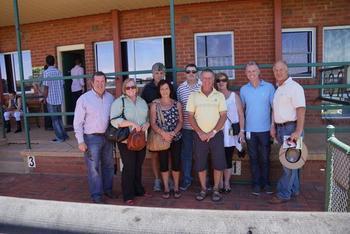 After an agonizingly close photo finish at the Cranbourne night meeting on the November 30th, TANNASET made the necessary improvement to become a winner at Benalla on Sunday, December 15th. By RESET out of TANNADICE PARK, this three-year-old filly had taken a little while to get to the races but her owners’ patience has been rewarded with a second and a win from her first two starts.

At massive odds at Cranbourne, owners and supporters could have been forgiven for thinking that she had won the race as they crossed the line, however, the camera is deceptively behind the line at Cranbourne and she was pipped by a horse on the outside. As a result, she was much shorter odds for her assignment in the three-year-old fillies Maiden over 1200m at Benalla. She jumped well from the gates, went forward, sat outside the leader, kicked away, and won quite easily by half a length with Jake Noonan in the saddle. It was a terrific win for the filly at only her second start and she has now earned herself a good break in the paddock.