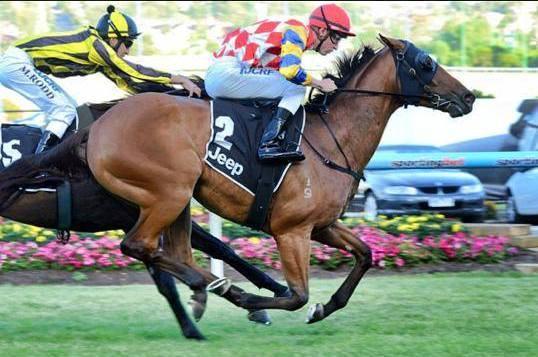 There are some racehorses who seem to attract bad luck and CALIBRATE has certainly been one of them. The four-year-old gelding by RESET out of MICA’S PRIDE, making him a half-brother to former stable star VARENNA MISS, has had everything that could possible go wrong happen to him.

After being gelded in early 2013, he was involved in a paddock accident and quite badly injured his leg. This injury required extensive recovery time, and just when we almost had him back in 100% order, on a very windy day, a tree branch snapped and spooked him in the wash and he sustained another, less serious, injury to another leg. This was the reason why ‘BULLET’, as he is known, had almost a year between his second and third starts. Just when we thought we had him right again, he broke out in some boils on his face, but fortunately we were able to send him to the races on at Moonee Valley on Friday night, January 31st.

At big odds and with low expectations, CALIBRATE finally rewarded everyone’s patience with a terrific win in the 1200m Maiden. Piloted by Steven Arnold, he came from right back in the field and sprinted terrifically to come over the top of them and win by three-quarters of a length.

Giving the win further meaning was the fact that, unfortunately, one of the owners, Mick Freer, passed away last year, so it was a special victory for his family and his good friend Darrin Walsh who have retained an interest in the horse.

Congratulations also to his strapper Dylan Caboche, and all the staff at Greendale and the various agistment and pre-training properties where a lot of work has gone into getting this horse, with so may issues, back to the track and winning. Hopefully all his bad luck is behind him and we see him go on to bigger and better things from his terrific maiden win.