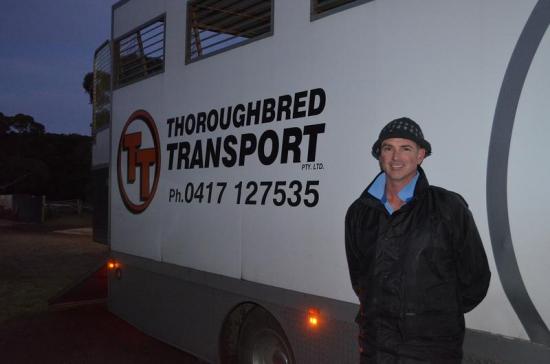 It could be an awkward trip home on Friday if results swing a certain way at Geelong.

Grand Orator has accepted for the BM78 race over 1200m which has a field of just nine horses. But one of those other acceptors is a 7YO gelding named Tycoon Express.

Tycoon Express is one of the three horses Simon Vercoe has in training.

As the old saying goes, keep your friends close and your enemies closer.

That’s exactly what Grand Orator will be doing on Friday when he jumps in the truck to Geelong where he will find himself next to Tycoon Express in transit.

Simon has been a part-time trainer for the past 12 years but he spends the bulk of his day operating Thoroughbred Transport, his transport company. His number one client is none other than Tony Noonan.

Simon and Tony have been friends for a long time but this will not be the first time they have each had a runner in the same race.

In November last year, Simon saddled up Molon Lave with Tony saddling up Worth Every Penny for a race at Mornington.

On that occasion, Molon Lave scored by half a length from Worth Every Penny in second.

“Tony was great after the race. He congratulated me and it wasn’t weird or anything,” said Simon.

But if it happens again, things could be different.

It would have been an easy walk back to the stables of both Mornington-based trainers but at Geelong, that is not the case.

The two hour ride back to Mornington will be a long one for either Grand Orator or Tycoon Express and Simon suspects it will be Tycoon Express.

“I think he will be competitive but he is a mystery. This is his first run for me.

“He has shown potential over the years and I am trying to bring that out of him because he has not won in awhile.”

Grand Orator meanwhile has been flying this preparation with a win at Yarra Valley, a third at Caulfield and a win at Mornington in his last three starts. He is also a winner on the Geelong synthetic track.

Depending on how the result goes, stable employees look forward to seeing who will be driving the truck on Saturday morning but Simon’s preferred result is a “two-way dead heat.”

Edit (June 27): Grand Orator was scratched on the morning of race day on vet's advice.