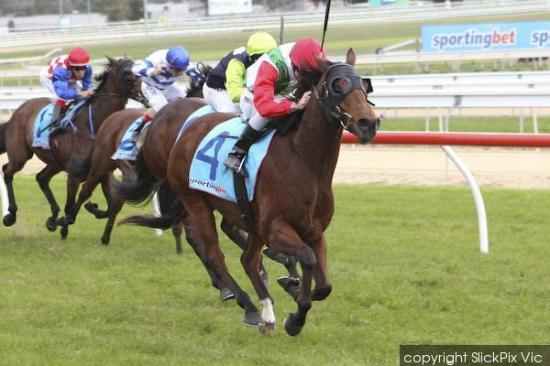 GRAND ORATOR is becoming a regular attendee in the winner’s circle after taking out the benchmark 70 over 1200m at Mornington yesterday.

He is currently having the best campaign of his career after winning by a length as a $6 chance. AIDEN, as he is known around the stable, has now won two out of his last three starts which has lifted his rating to 73.

“He’s really thriving on this European-type preparation where we race him every 3-5 weeks,” Tony said.

“It gives him a good chance to recover from each race. He’s been able to retain his form and he’s racing well. I couldn’t be happier with the horse.

“Jake (Noonan) gave him a brilliant ride by making ground gradually in between the 1000 and 600m mark which put him in a really good position getting around the corner.

“The horse had spent no petrol to that point, balanced up well and gave a really good turn of foot when straightening which put the race beyond doubt.”

Aiden will continue the preparation which has been working out well for him by spending some time down at the beach before he steps up in class in his next start.

The win caps of a remarkable week at Greendale with it being Tony’s third winner for the week.