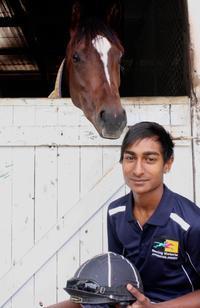 Despite his mounts finishing 8th, 11th and 9th in their respective trials, Dylan was pleased with his rides which were all ridden perfectly to instruction.

“We’re just trying to get their fitness up before they get a race start. They’re not there to win,” he said.

“It’s a learning curve for them and Tony was happy to ride a few hands and heels without any major pressure.”

The step up to riding in official trials is a big one for apprentice jockeys but one which didn’t faze the 19-year-old.

“I was a little nervous but it wasn’t too bad. I knew the three horses very well after riding them at track work for a year and at Mornington jumpouts.”

Although they were only barrier trials, Dylan treated them in the same way he plans to approach his race riding.

“I looked at the form and knew which horses were in form and which ones would be the likely leaders.

“I’d spoken to a few other jockeys who helped me get prepared for the different style of racing.

“Jumpouts are more spaced out and everyone keeps their line. Barrier trials are different because they race a lot closer.

“I went from six-horse jumpouts to 15 in official trials.”

As per the rules of his apprenticeship with Racing Victoria, Dylan qualified as an official barrier trial rider after riding in 120 local jumpouts.

Once Dylan completes 20 official barrier trials, he will commence race riding with a 4kg claim which he is hopeful will be in a couple of months time.