Jen Duffy discusses the danger of working with horses 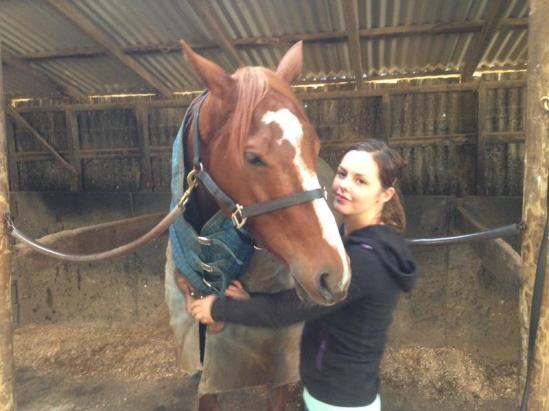 It’s been seven months since Venus kicked track rider Jen Duffy which resulted in limited feeling in her arm.

Today Jen underwent an operation to repair the main nerve in her right arm which also required taking a nerve from her foot.

The operation will keep her away from the stables for at least three weeks and she’s already feeling the pain.

“I have my own jumpers and eventers at home so it sucks that I can’t ride and compete on them or be around the stable looking after my favorite horses,” she said.

Jen has been a track rider at Tony Noonan Racing for the past three years and she can’t imagine working in any other profession. Growing up near Bendigo with a horsey family, she attended Pony Club from a young age and has been around horses ever since.

Despite knowing the dangers of riding trackwork, it doesn’t worry her.

“I haven’t been hurt bad enough to reconsider.”

Much tougher than her baby-faced demeanor may lead you to believe, the list of injuries Jen has endured would lead most to browse the classifieds.

"Last year, two weeks after coming back from a knee reconstruction from an accident at the stables, I was galloping Iris when she got a fright and I came off.

“I got caught under her legs resulting in three broken ribs and a lot of bruising.

“I also broke my ankle and wrist at the same time when a loose horse ran into me whilst riding at Flemington one morning.  That’s just the recent ones.”

Horse racing remains one of the most dangerous sports in the world and being the parent of track rider is a scary proposition considering they ride a lot of young horses who are still immature.

“It worries my Mum and Dad but it’s something they know I love doing so they can’t really do anything about it."

While Jen is on the sidelines for three weeks as she recovers from her operation, she will be counting down the days until she can tend to her beloved horses both inside and outside the stable.

Without the need to wake up at 3.45am each morning to ride track work, Jen will get some well deserved rest on the couch and the team at Tony Noonan Racing wish her a speedy recovery