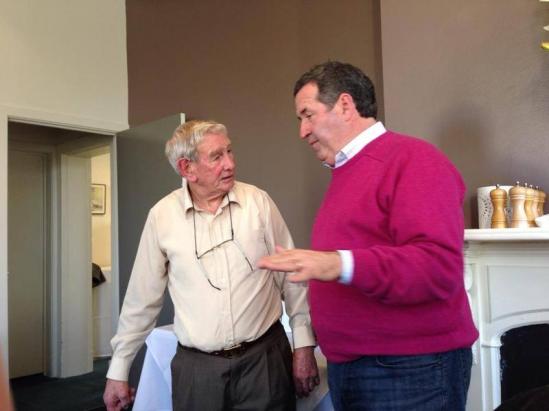 The second Tony Noonan OBE lunch of 2014 was a great success with guest speaker Bob Skelton enthralling attendees with his recollection of the winning ride aboard Van Der Hum in the 1976 Melbourne Cup.

Buzzing with energy and telling the story as if it were yesterday, the finite details of Van Der Hum’s preparation for the Cup produced a vivid picture which took the room back to 1976.

Held at The Graham in Port Melbourne, guests were met with an impeccable two-course meal worthy of royalty.

“We had another great OBE lunch last Friday. The Graham was a great venue with outstanding food and it was ideal to adjourn to a private room for the lunch after the very enjoyable pre-lunch drinks,” said guest Louis Mihalkya.

“Bob Skelton was an entertaining and interesting guest and brought back wonderful memories, especially for those of us who were at the 1976 Melbourne Cup which he won on Van Der Hum. Book us in for the October lunch please.”

Making the day even more memorable, all attendees put in $5 towards a group quaddie for Flemington the following day.

With some of racing’s sharpest minds in attendance, the group quaddie ultimately hit to return everyone $50 from their $5 investment.

The next Tony Noonan OBE luncheon is tentatively scheduled for October 10, the day before the Caulfield Guineas.