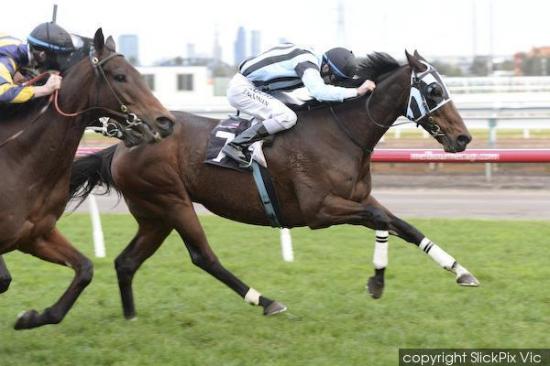 After Zevada’s thrilling win at Flemington on Saturday, Tony took the time to sit back and reflect on the enormous journey our stable has been through not only to get Zevada back to the track, but to save his life.

Thank you very much to those who sent me text messages after the race. Many queried why I was so emotional after his win on Saturday and it is a story that deserves to be shared.

It stems back to the injuries and setbacks this horse has had over his career. To still see him standing strong as a 9yo is what, really, most trainers probably relate to best. It is when you have issues and problems with horses that you get to test not just the horse’s ability and courage, but yours as a trainer.

That’s what was so enjoyable about Saturday.

This horse incurred a tendon injury in 2011 and we were able to successfully bring him back for wins at Sandown and Flemington by 2013. At that point we were very confident he could win the Brisbane Cup that year. But while in training up in Brisbane, he sustained another tendon injury.

If the horse was a younger horse you would go forward with confidence but when a horse reinjures himself as a 7yo and you have to go through the entire process again, it is a lot of work during the rehabilitative period to get them up. You then have to make certain that you don’t ask too much too quickly of them.

I’ve always known how good this horse could be and I knew how tough he was. There are a lot of horses that I would not have gone on with through another long recovery process but Zevada was one I felt was worth persisting with.

What made Zevada’s win even more special is that nine weeks ago, he contracted some sort of virus which was affecting his red cell count to the point there is was a question about whether he may be hemophiliac. He was rushed to Werribee Hospital and the surgeons said they would do everything possible but were not confident about the outcome. At that stage we just wanted to see him come through because his life was in serious danger.

When he was finally back and ready to race for the first time in 15 months, he was beaten by a big margin but there was enough in that run to be confident we were on the right track. He then improved again in his next run at Sandown and we saw he still had a zest for racing.

It wasn’t just the win at Flemington that got me a bit emotional, it was the way he won.

He clipped heels at the 800m mark and could have easily come down. Jake stayed on, balanced him up and pulled out wide to ensure there was no interference which is crucial for a big striding horse like Zevada. When he challenged and hit the front at the top of the straight, the emotion really kicked in.

With so many interferences throughout the last three years, his effort to dig deep and find something to hit the line just made it all worthwhile.

That is what I love about training.

When these horses come across your path, they really have an impression and effect on you. It’s been awhile since we have had a type of horse that can do that. At times you think you might not ever get another horse that can do that. You least expect it being the 9yo gelding in your stable but to see that on Saturday gave us a glimmer of hope.

If he stays sound, he may end up achieving what I have always felt – he could be the best horse I’ve trained. There have been a lot of good horses that have had enormous results but I really believe this horse has exceptional ability, but we just haven’t been able to see it.

Zevada - he may or may not be as good as he was going to be but he can still be a good race horse for the stable, the owners and all his many followers.