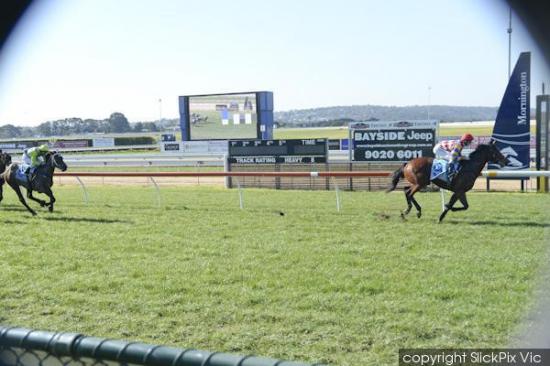 Eased down on the line, White House Lady produced a perfect performance on debut at Mornington to win comfortably by 4.3L.

Entering her first race with significant expectation on her shoulders based on her breeding, she not only lived up to the stable’s expectations – but exceeded them in her dominant display.

By Commands and out of Jacqueline Rouge, neither the Heavy 8 ground nor widest gate concerned her, the stable or connections.

Pinging out of the gate, Jake Noonan was able to dart forward on her for a comfortable lead from the widest barrier. As she hooked into the straight, White House Lady thrived in the conditions and extended her lead with every stride.

Taking two looks over his shoulder Jake eased her down at the 75m mark and the win gave Tony a family trifecta.

“Part of the thrill is my link to the family,” said Tony.

“What they all have in common now is they all won their first race start.

"Taking that into consideration, this filly is on the way to being a stakes horse which is a tremendous thrill for connections.”

White House Lady was purchased at the Queensland Magic Millions sales and Tony was delighted to share the victory with several of his long term clients.

“Jeff Krake, Johnny Racovalis and Colin Barlow have been with us at those sales and have been fantastic owners over the years,” said Tony.

“It is great for Craig Wheeler who has been in a lot of horses with us without any real joy because he loves this horse and would do anything for her.

“It is also great to have new people onboard like Tat Cork and James O’Brien who are getting to see not just the on-track success, but also the social aspect of racing horses with us.

“Chris Daly and Fred Womersley raced a good horse named Ab Almalik. Their interest in this filly was off the back of Ab Almalik (a Kilmore Cup winner) who ran second to Jacqueline Rouge in a Listed race in Queensland so they were fully aware of Jacqueline Rouge’s ability.

Making victory even sweeter for connections, White House Lady is Super Vobis nominated which bought the winner’s cheque up to $16,800 courtesy of the Super Vobus bonus attached to the race.

With stakes racing on White House Lady’s agenda, Tony expects her to make an appearance at Flemington at some stage during spring.