Bilo Bar breaks through at Sale with tough win 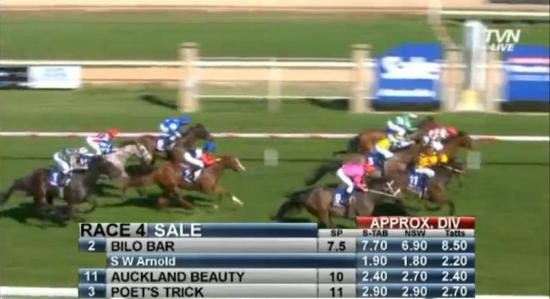 In his fifth career start, Bilo Bar broke his maiden at Sale with an honest effort to confirm the stable’s belief in this gelding’s toughness.

Returning to Sale after running 3rd at the track in his last start, Bilo Bar jumped well with Steven Arnold in the saddle. Sitting one outside the leader in transit, the leaders were favoured by the slow tempo as the field straightened.

Boxing on steadily in the straight, Arnold remained calm on Bilo Bar who kept grinding away at the margin as the leader tried to break away.

With Poet's Trick tiring late, Bilo Bar grit his teeth and kept coming like a tough horse does to hit the front in the final strides of a well timed run to the delight of Tony and connections.

“He’s a tough horse that doesn’t have a big turn of foot,” Tony said.

“We’ve always been of the opinion that he will be most comfortable over a mile and the way he kept coming today over the dying stages of the race showed how much heart he has.

“He’s a good worker but at the start of the preparation, he still had a long way to go in terms of maturity. Two months ago, he would have just folded at the 100m mark but he’s such a big horse with such a big stride that he’s only now comfortable in his own body.”

The 4-year-old Stratum gelding has improved with every run this preparation.

“We just put a line through his first-up run at Mornington which was a complete forgive run.

“He was going to go Sandown on Wednesday but when the final field came out, we thought it was a very tough maiden (won by Divan). The owners were very understanding about our decision to come here instead and it has paid off handsomely.”