Just getting Crystal to the races a win for the stable 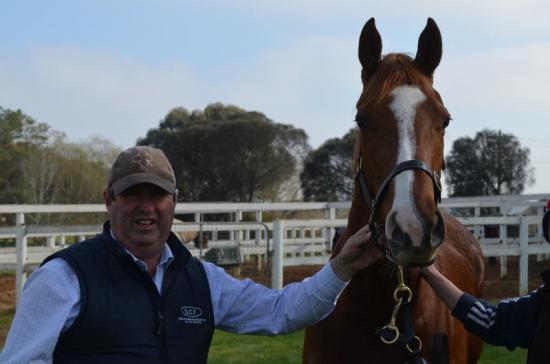 Often lost amongst racing is the journey it takes to get a horse to the races. In September, one of Tony Noonan Racing’s longest journeys finally delivered relief to some very patient owners.

She wasn’t a million dollar purchase, her breeding wasn’t sexy and punters can be excused for overlooking her in the market because when a horse make their debut as a 5-year-old, there is often something wrong with them.

Tossed aside by various other trainers and pre-trainers,

A noted handler of fillies and mares, Noonan was adamant he could tame the chestnut filly if given enough time but wasn’t game enough to back himself into a timeframe. Raced by owner-breeder Joanne Spears,

“She had been broken in but she’d completely forgotten everything she’d learned,” Noonan said.

“She was just a menace around the stables when she first arrived. It was not safe having her around the staff so I got in touch with Nathan Dunn about doing some work with her.”

Former jumps jockey Nathan Dunn is one of Noonan’s pre-trainers who breaks in horses and conducts barrier training for the stable. Upon accepting the assignment of

“She was a nervous wreck when I first met her. She was reactive to the smallest movements around her and her mouth was cut to bits from being broken in,” Dunn said.

“Her first response when we led her up was to with either to rear, flip over or run away.

“Just tying her up in the stalls was an issue for her.”

Working in the safety of his bullring, Dunn successfully saddled up

The coming weeks would be all about re-education but with the mentality of a yearling, the intensive work was taking its toll on Crystal who became increasingly frustrated and needed a break from work.

A three month spell was expected to allow her to mature and come back as a better-mannered 4-year-old. But once again in her time off, she had forgotten everything she had learned previously.

Perhaps it was fitting that she was named “

Coming back from her spell, it became clear to Noonan and Dunn that she had been scared from past experiences. Where she would behave badly, she had come to fear the sight of her rider.

Repressed memories of whips, spurs, bridles and riders were triggered upon sight and she would be overcome with fear. Tempering her behavior with physicality was no way to treat Crystal who had been devoid of compassion at times in her life.

They had to stop and get her mentally right before even contemplating a saddle or rider again. To see her go through another traumatising education process would have been too much for

And so, Noonan sought the expertise of a trusted horse whisperer in Nagambie to ply their trade with

Taking the time to teach

Upon returning to Noonan’s Mornington stables in the autumn of 2014,

Now safe to be around for Noonan’s staff,

Crystal quickly became one of Duffy’s favourites despite being “a pain to saddle up” at times.

It was now time for

“The second time round was all about building her confidence,” Dunn said.

“I needed to be able to work with a blank canvas because she had been at the point where she was beyond repair and I understood why no one else wanted to work with her.

“Mentally, she needed to fully repair and she got that chance over the summer.

“Tony and the owners were fantastic. I was able to paint a picture from a blank canvas.”

“I bought her right back to basics. We went through the mouthing process all over again.

“When I was riding her, I didn’t do a great deal of fast work. We did lots of slow walking, trotting and cantering. There was a lot of stop-starting.

“I regularly worked her in both the morning and the afternoon. In the mornings, she would be a bundle of nerves but she would become really good in the afternoon once she knew you had time for her and she wasn’t just another random horse in the stable.”

Within six weeks of working closely one-on-one with

Away from the sanctuary of Noonan or Dunn’s stables where

Playing up behind the barriers and refusing to load, apprentice jockey Dylan Caboche had no choice but to dismount

With the physical assistance of Mornington’s barrier attendants,

Despite this, Noonan walked away from the track with a cheeky grin. Secretly, he was over the moon with the jumpout. Run over 600m,

But for a horse to enter a race, it must obtain a barrier certificate first. With

Fortunately for Noonan, Nathan Dunn had renewed his jumps riding license for the 2014/15 season despite not having ridden in a race for 15 months. He was also verging on the 72kg mark but was the person best placed to ease

The job was done but Noonan wanted to give her one last test before going to the races. She needed to jump well, settle nicely and hit the line well in what would be her third jumpout.

What happened next, only Noonan saw coming.

Dunn, who happened to be at Mornington in the grandstands that morning, could only look on in amazement as

She was finally ready to race.