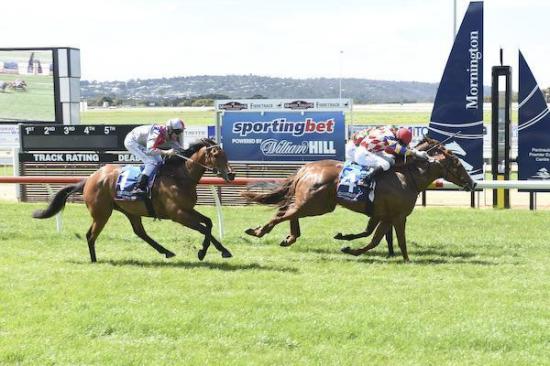 Horses are often written off when they debut as a 5-year-old but in Raven’s Fire’s case, she just needed time.

Having her second career start on her home track at Mornington, the Tony Noonan-trained mare proved too strong for the maiden field when she dug deep and pulled off a tough victory in the final strides.

It had been a very long journey for the Noonan stable getting Raven’s Fire to the races after her younger years were plagued with issues.

Noonan was very happy for connections who had stuck by the mare’s side despite her issues.

“She has raced horses with us for a very long time and she has been so patient with this mare. A lot of people had written this horse off so I’m just so pleased for Joanne, her family and friends to get this win.”

Despite missing the jump by a length, rider and son Jake Noonan drove Raven’s Fire up and she mustered speed comfortably to sit outside the leader, Bel Vuitton.

Given a comfortably run in transit off the leader, Jake cornered Raven’s Fire a length behind the leader but upon balancing, began closing the margin with every stride.

Raven's Fire had been a drifter in betting despite having a torrid run on debut at Sale and still running an eye-catching third.