Rick Hore-Lacy a hit at final OBE Luncheon of 2014 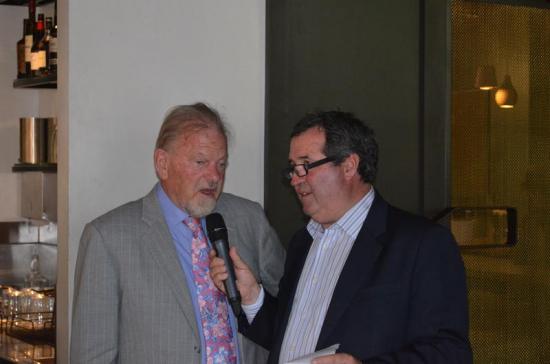 The afternoon was highlighted by guest speaker Rick Hore-Lacy who recollected his memories as the trainer of champion racehorses Redoute’s Choice, Canny Lad, Dash For Cash, Toorak Toff, Spartacus and Clay Hero.

Prior to Hore-Lacy’s appearance, a replay of what many believe as the greatest Guineas ever – the 1999 running where Hore-Lacy saddled up Redoute’s Choice to take on arch nemesis Testa Rossa - was shown.

The two would later go on to become champion stallions in their own right.

Entertaining the crowd with his quirky tale of how he became a racehorse trainer, Hore-Lacy left the crowd in both laughter and shock as he opened up about some of the biggest punts he’d taken in his lifetime.

Host and Mornington-based trainer Tony Noonan holds these lunches throughout the year in memory of late friend James O’Brien. It is an opportunity for his owners, past owners and friends of the stable to catch up over a meal and drinks, often prior to a major race day where a guest speaker is always organised.

“It’s always great to see so many of our owners and past owners here and I want to thank them all for coming,” Noonan said.

Hore-Lacy has been reducing his stable numbers throughout 2014 and expects to have it cleared by the end of the calendar year when he plans to retire. .

The 75-year-old commenced training in 1976 and has trained 18 individual Group 1 winners throughout his colourful career.