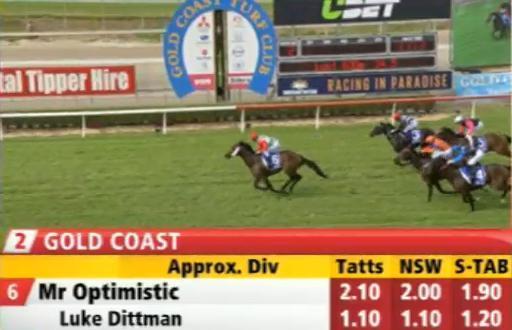 Mr Optimistic proved a class above when romping away to win the 2-year-old Maiden over 1200m at Gold Coast for Victorian-based trainer Tony Noonan.

“He’s been doing a few things wrong in his races but he jumped well today for the first time and Luke (Dittman) did an excellent job to get off the fence when he did.”

The 2-year-old Domesday colt has been in

“He’s been up for a long time but he shows such a good work ethic that we had to give him this chance today. We'll just see how he pulls up tomorrow before deciding plans.”

“It’s a great result for Louis Mihalyka at Laurel Oak and Glenn Fraser who raced the dam and are now racing the progeny.”

Jumping from barrier 1, Mr Optistic jumped well for apprentice Luke Dittman before just easing back midfield to settle with cover.

Upon straightening, Dittman navigated the field to get Mr Optimistic ($2.20F) off the rail and find clear running room at the 300m mark before hitting the front 150m from the post to score by 1.8L from Emphasis ($26) and Relampago ($4.60) in third.